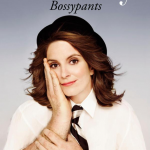 OK, I didn’t really read Bossypants, Tina Fey’s recent memoir, except for the excerpts in The New Yorker (available, behind a paywall, here. One of the local teenagers downloaded the audio version from audible.com, and we listened to it as a family during a long car ride.

While reading the excerpts I thought that Fey’s writerly voice was a little, well, bossy is the word that comes to mind, but her tone while I was listening (Fey reads the work herself) is masterly. This is as it should be; Fey was trained as an actor. The book is hilarious and appealed to our entire family, which includes two college-aged kids. The I’m-an-awkward-girl-growing-up scenes felt all too familiar yet made both my daughter and me laugh out loud (though there was some squirming from squeamish male family members). Fey’s descriptions of her friendships with gay men and her college-age efforts to connect with unavailable men ranged from charming to a “that’s so familiar” cringe-inducing honesty. Her descriptions of tortured Christmas-time drives across Pennsylvania with a toddler in a car seat hit a little too close to home, even though our kids have reached driving age.

And then there were the descriptions of Saturday Night Live and 30 Rock. Fey includes the script of her first appearance as Sarah Palin (the one where Amy Poehler is Hillary Clinton) in the hard copy of the book (I went over to a local bookstore and looked), but the performance is included in the audio book, a distinct advantage. Everyone in the car enjoyed that – I’ve provided a link to a youtube clip. Beyond SNL, Fey is generous to her 30 Rock writers and co-stars without giving too much away about the show, and I admit I’ll be looking up a few more episodes to watch what she called the best jokes.

The audio book comes with a pdf download of the hard copy book’s photos (and you get to avoid that weird cover photo.) In general the audiobook feels like a rare improvement over the actual book. What do you think of audio books in general? This one in particular? Tina Fey? Comment away!

Brooklyn Bugle Book Club: “To The End of the Land” by David Grossman