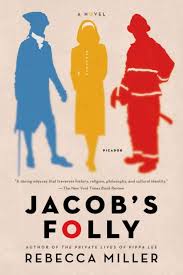 Pity poor Jacob Cerf. A French Jew who was educated first to be a nobleman’s valet, and then an actor, he lived and died during the reign of Louis XV. And dead he remained until Rebecca Miller resurrected him in the present, where he returns to life in the form of . . . he has wings. Jacob spends a great deal of the book figuring out what he is, and was, what he can do, what he can’t, and what he can but shouldn’t. The objects of his attention are two: first is Leslie Senzatimore, husband, father, volunteer firefighter, and all around good guy who lives somewhere on Long Island.

Then there’s Masha, who when we meet her is hospitalized with pericarditis. Masha is the daughter of pious Orthodox Jews, but wants something more. Jacob recognizes a sense of longing in her – naturally, it’s one that he himself has felt. He sets out to help her realize it. From these improbable elements, Miller has fashioned a blend of historical fiction and modern cross-cultural misconceptions. The result is a delightful novel that is funny, thoughtful, and compelling.

One of Jacob’s new skills is the ability to read the minds and to influence desires and the character’s actions. In his own life, once he got out of the Jewish community, Jacob was mostly amoral – in fact the historical figure he brings to mind is Casanova, without the priestly education. (The fictional character he brings to mind is Gregor Samsa.) Jacob falls in love with beautiful Masha, and recognizes her desire to be an actress – something her culture would not allow. Leslie also falls in love with Masha, and Jacob determines that there must be some way to bring them together. He infiltrates their thoughts, pushing them to take actions they might not have thought to do on their own – or might they? The question of free will is never very far away from the action.

Like Jacob in his time, Masha and Leslie struggle with the expectations of their communities. Masha lies to her parents about acting classes, then takes the train by herself into Manhattan from her Far Rockaway home. She loses track of the time, and cannot get home in time for the Sabbath. Leslie’s wife, Deirdre, feels him drifting away. Masha leaves home at the urging of a disgraced Hollywood agent who sees her as his ticket back to influence. Like Jacob, she enjoys her new life but misses some of the strictness. She finds something of it in Leslie, who is upright without being at all starchy. It’s a nice inversion of Jacob’s own story, also threaded throughout.

Miller’s story illustrates the continuity of our humanness across time and culture and the way that communities go on, repeating the acts and mistakes of the past. “Jacob’s Folly” is an unlikely and very successful blending of historical fiction and a modern love story. It’s also very funny. Enjoy it on your summer travels.

I’ll be on mine for the next couple of weeks. See you in July.