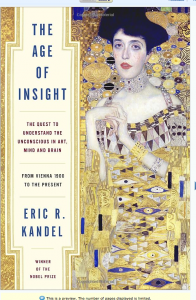 Did you ever wonder what the new neuroscience of PET scans and functional MRIs can tell us about the physical basis of emotions, and of their relationship to art? Eric Kandel, the winner of the Nobel Prize in medicine and the author of the poignant and thoughtful memoir “In Search of Memory,” did, and this fascinating, accessible book is the result. In “The Age of Insight” Kandel explores our present “intellectually satisfying understanding . . . of how we respond perceptually, emotionally, and empathically to the facial expressions and bodily postures of others.” The result is an astonishing and clear (and beautifully illustrated) synthesis of the present state of brain science and the physical basis of our perceptions and emotions.

Kandel starts in the Vienna of 1900, describing the salon of the art critic Berta Zuckerkandl, at which artists and painters were able to meet and discuss some of the important work in medicine, art, and literature underway there. Vienna’s medical centers were one of the origins of the practice of what Kandel calls ‘scientific’ medicine (medicine based on observation and replicated experiments). He describes, meticulously and in convincing detail, the psychological insight of the painters Gustav Klimt, Egon Schiele, Oskar Kokoschka, the writer Arthur Schnitzler, and Sigmund Freud. Kandel pulls no punches, criticizing Freud’s decision to take psychoanalysis into the realm of anecdote rather than data, for example.

In succeeding sections Kandel explains the cognitive psychology of visual perception and our response to art. We respond to hands and faces depicted in paintings just as we respond to the hands and faces of people we see every day. Kandel explains that the brain interprets and invents what we observe, and the interpretation is influenced by emotion. The brain process is the same when we look at a work of art. Artists often exaggerate one feature or another in order to heighten the emotion. Kandel next explores the biology of the beholder’s visual and emotional response to art.

The final section discusses our biological and cognitive understanding of creativity. He describes some work on problem-solving, and suggests that letting our unconscious turn over problems is important to creativity. This section is necessarily skimpier than the preceding ones, as the scientific work is at the outer edge of what we know. Nonetheless, Kandel makes an impassioned and persuasive case for art. He writes:

The information conveyed in a story or work of art need not be simple. It can be complex and multidimensional. Every inflection of the voice, every slight contraction of a facial muscle matters. These cues help us understand what emotions the character is experiencing and thus to predict what he or she will do next. Survival in society is dependent on learning to read such cues, which is why we developed the neural machinery for representing them, reacting to them, and most important, desiring to understand them. And that is why we generate, appreciate, and desire art: art improves our understanding of social and emotional cues, which are important for survival . . .

Kandel’s book is complex and multidimensional, and very, very interesting. Do you agree? Let us know in the comments.