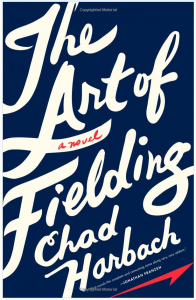 Despite what I must admit is a rather dim memory of the New Yorker review suggesting that “The Art of Fielding” is not really a book about baseball, I have to say that it is not about baseball in the same way that “Moby-Dick” is not really a book about whaling. That is to say, “The Art of Fielding” is a book about growing up in which most of the growing up takes place around a baseball team. As Harbach sweetly puts it, his characters feel themselves unfolding within themselves for most of the novel.

The baseball team belongs to Westish College, a small D-III liberal arts school located in Wisconsin on the shore of Lake Michigan. The growers-up are Henry Skrimshander, an unprepossessing teenager who plays shortstop surprisingly well, Mike Schwartz, Captain of the Westish Harpooners baseball (and football – it’s a small school) team, and Owen Dunne, winner of the Maria Westish award and Henry’s roommate. Pella Affenlight, daughter of Westish’s president, Guert, is another. She returns to her father’s home after an adolescent rebellion and early marriage, seeking to recover her college options.

Guert Affenlight is an academic star, a specialist in Herman Melville, who left Harvard to become president of Westish. You may be wondering how a Midwest school came to be known as the Harpooners, even if it is situated on one of the Great Lakes. While in the library one night as a Westish undergraduate, Affenlight discovered the text of a lecture delivered by H. Melville.

The stated topic of the lecture was Shakespeare, but H. Melville, excusing himself by the sly pronouncement that “Shakespeare is Life,” used the bard as a reason to speak of whatever his wished–Tahiti, Reconstruction, his trip up the Hudson, Webster, Hawthorne . . . all with a scattered, freewheeling ferocity that would have done little to refute his in-laws’ allegations of mental imbalance.

In the way of these things, the professor to whom Affenlight handed over his discovery published an essay without acknowledging Affenlight. That Affenlight took this in stride as he went on to become an academic tells you a lot about his character.

Mike, who is preternaturally mature, arranges with Guert for Henry to come to Westish on a last-minute baseball scholarship, and takes over his training, making sure that Henry will grow into the role of baseball superstar. Henry complies, until an errant throw robs him of his self-confidence and his skills erode. Complications of all sorts – romantic, athletic, academic and administrative – ensue. Even Affenlight has some growing up to do. He never married, but is thoroughly surprised to find himself falling in love with the beautiful, and gay, Owen.

Harbach owes (and acknowledges) debts to, among others, John Irving, Jay McInerney, Jonathan Franzen, and obviously Herman Melville. The story is entertaining, allusive, and yes, very much about baseball. It’s a debut novel, and there are some large gaps and unlikely but convenient events. What did you think? What other references and allusions did you see? Let us know in the comments.