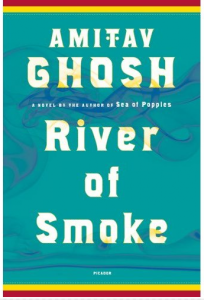 “River of Smoke” is the second volume of a projected trilogy about the first Opium War (1839-1842). I reviewed the first book, “Sea of Poppies,” here. When Sea of Poppies ends, the characters are in two boats and facing a storm . . . The second novel stands on its own, but clearly some of the characters from the first have survived and their continuing story is one of the subjects this second novel. As for the others – we catch sight of one, possibly. One reverts to his opium habit, but the fates of several others remain a mystery.

After an initial chapter in Mauritius in which we get a peek of the futures of a couple of characters from the first novel, including a glimpse of the many grandchildren of Deeti, the Indian emigrant, and in which Paulette Lambert, the orphaned daughter of  a French botanist, struggles to make her way alone, we are once again at sea, this time on the Redruth. Paulette has thrown her lot in with another naturalist, Penrose Fitcher, who is on his way to China to find something he calls the Golden Camellia. This is not an unreasonable hope, as Fitcher is carrying a painting of the plant he hopes to track down, and China had already been the source of chrysanthemums, peonies, wisteria, hydrangeas, and begonias, to list just a few.

The novel also follows the course and passengers of another ship, the Anahita. The Anahita, part of the opium fleet which sails annually from India for China, belongs to a Parsi businessman, Bahram Modi, who has invested his life savings in a large shipment of opium. On a stopover in Singapore, Modi takes on Neel as his munshi, or scribe. (Or translator – see the Chrestomathy, or glossary, from ‘Sea of Poppies.’ The Chrestomathy is not included in the second book; happily, it is available on Ghosh’s website. Since Neel is identified as the Chrestomathy’s author I don’t think it’s giving anything away to identify his appearance in the second book.) The fleet leaves India loaded with opium despite warnings that the Chinese are no longer tolerating the import of opium.

Everyone fetches up in Canton, the main port open to Western traders, where the opium has in past years been offloaded for open smuggling into China. Western women are not allowed in Canton, and the Westerners are limited to their own section of the city. This year, the ships are kept at harbor near Macau, and the magnates move upriver to Canton where they fully expect the mandarins who rule China to back down. Ghosh describes this settlement, and the society the men created there, weaving a rich, complex brocade from the threads of politics, history, economics, art, and botany. Ghosh paints a very sympathetic portrait of the Indian trader whose entire livelihood is at risk, and a somewhat less flattering one of the English free traders, who are convinced that right is on their side.

Ghosh splits the narrative among two main reporters, Bahram Modi and those around him, and a painter named Robin Chinnery, who describes the delights of the all-male settlement, and the events surrounding the bitter conflict over the importing of opium, in letters to Paulette, his childhood friend. Among many other things, the book allows Ghosh to enchant the reader with his delight in words and wordplay, including several multi-language puns. Here he is on the interplay of words with personality:

As the reading proceeded, Bahram had the odd impression that he was listening not to the translator, but to some other voice that had taken command of the young man’s mouth and lips, a voice that was at once completely reasonable and utterly implacable. Bahram was astounded by this: how could the voice of this remote and distant figure Lin Tse-hsu, have seized control of this youthful Englishman? Was it possible that some men possessed so great a force of character that they could stamp themselves upon their words such that no matter where they were read, or when, or in what language, their own distinctive tones would always be heard?