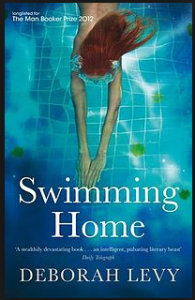 In the summer of 1994, the Jacobs family: Joe, a well-known poet, Isabel, a war correspondent, and 14-year-old Nina, have rented a villa outside Nice for a vacation. Their friends Mitchell and Laura, who run a shop in London, are sharing the villa for the summer. The five of them are greeted one morning by something – a bear? There has been on wandering nearby – floating in their pool. In fact, it’s Kitty Finch, naked. Once she’s out of the water and identified, Isabel offers Kitty the spare room.

Kitty is a student of biology, there to study local plants. But she is not a stranger – her mother was a cleaner for the villa’s owner, and she has stayed here before. And she is not just a student – she is also an aspiring poet, and has brought Joe one of her poems. His poems are in her head, she says. Her poem? “It’s a conversation with you, really.” Naturally, he is seduced.

It’s not the acts but the thoughts that are hidden in this book, and the tension lies in watching the characters understand the developing consequences of their actions. Isabel has spent much of her working life in faraway countries, leaving her husband and daughter to develop a strong relationship. Joe is really Jozef, smuggled out of Poland during the Second World War to safety in the UK. And Kitty is not entirely sane. What does it mean to be home? To come home? Where is home? One character, the doctor who lives next door, has grown roses in an “attempt to create of a memory of England in France.”

The story plays out over the course of a single week. Levy shifts points of view from character to character, letting us see what each character sees while unveiling the emotional landscape only very slowly. We follow most of the characters as they separate for the day’s seemingly inconsequential activities. Isabel, for instance, regularly escapes to Nice; Laura and Isabel take a walk and interrupt the photographs of a group of Japanese tourists; Nina and Kitty collect stones on the beach. Kitty and Joe meet for a drink at a hotel and Kitty explains that her favorite poem is Apollinaire’s “It’s Raining.” When the characters come together again explosions happen.

In this multi-layered and complex book what seems random is well planned. Not many places are safe. Individuals must come face to face with their true selves. It’s a memorable book, much deserving of all the praise it has received. What turn of events surprised you most? Let us know in the comments.