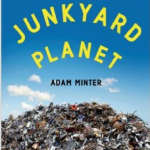 Reduce, Reuse, Recycle. This mantra has been around since at least the first Earth Day back in 1970. Like you, perhaps, and most other Americans, I find it hard to reduce. I have learned to take bags with me to the grocery store. We had cloth diapers (and a diaper service) for our first child but we threw our hands up and went with disposables when the second came along. I wash out ziploc bags and reuse them. Food scrap collection isn’t required but I do that, most of the time anyway. But that’s about the extent of what I can reuse. So I recycle, and that makes me feel I’m doing my bit. Also, it’s required, though now I don’t have to sort so much of it. (You can watch a machine sorting recyclables here. Minter’s description of the science behind the technology is fascinating.)

But what happens to those mountains of newspapers, cans, bottles, jars and junk mail? That’s where Adam Minter picks up in his lively and entertaining new book “Junkyard Planet: Travels in the Billion-Dollar Trash Trade.” As it turns out, there’s gold in those hills, sometimes quite literally. Minter points out that what I call recycling is really “harvesting” – that is, collecting materials to turn them into something else. Moreover, harvesting is one of the hardest parts of the process. Because Americans like to toss stuff. Or, rather, we have no economic reason not to toss it. That’s not true other places. Minter says:

There are few moral certainties here, but there is a guarantee: if what you toss into your recycling bin can be used in some way, the international scrap recycling business will manage to deliver it to the person or company who can do so most profitably.

(Not everything can be reused. Minter says some “goods–such as smartphones–are only partially recyclable, and some–like paper–can only be recycled a finite number of times. So yes, recycling delays the trashing of your castoffs. But they don’t live forever.”)

Despite the ubiquity of office paper recycling programs and returnable bottle laws, it turns out that what we recycle most of, if you’re measuring by weight, it’s cars. Nearly 12 million of them last year, and most of that is metal. Nowadays, cars can be almost completely recycled. In fact, the scrap metal in America’s old cars is so valuable now, and technology has improved enough, that old piles of junked cars that once littered the landscape have been salvaged and recycled. Some landfills have been “mined” for the cars that were once placed in them. (You can see an auto shredder in action here.)

Where does it all go? According to Minter, most of the scrap from the US goes to China, with India the next largest importer. Their interest is driven by two factors: demand and shipping prices. Both countries have growing industrial sectors that need large amounts of raw material – which is what scrap metal has become once it leaves the recycling plant. Shipping costs are also key. China makes a lot of products that are exported to the US (iPhones and iPads to name just two). But since the US doesn’t export as much to China it doesn’t cost much for Chinese scrap dealers to use shipping containers that might otherwise be empty to send scrap back.

One way or another, the boat is going back to China, and the fuel to send it there is going to be burned . . . So anybody — or anything — hopping on that boat is getting what amounts to a carbon-neutral boat ride to China . . . [T]he critical fact for American scrap companies competing against Chinese companies is that the price of shipping to China is typically cheaper than shipping between geographically distant U.S. cities.

Scrap, it turns out, is picturesque, the technologies are modern, and Minter’s lively writing conveys his fascination with the industry. The gold I mentioned above? Some people, in some places not in the U.S., are willing to take apart cell phones apart to extract it even if local safety and environmental regulations are not up to our standards. “Junkyard Planet” is a book for anyone interested in the environment, the economics of recycling, or a thoughtful look at the consumption we take for granted.

Will Living In Gracie Mansion Make de Blasio Look Like A Schmuck?