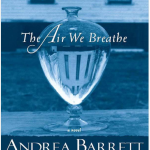 I recently finished reading Andrea Barrett’s 2007 novel The Air We Breathe. It’s set in a tuberculosis sanatorium in the fictional Adirondack town of Tamarack Lake during 1915-1917, while the Great War was under way but before the US had entered it.

The story involves a quadrilateral romance. Miles Fairchild, a wealthy industrialist patient staying at a private boarding house in Tamarack Lake loves Naomi, his landlady’s daughter. She in turn loves Leo Marbury, an impoverished German-Jewish émigré confined to the public sanatorium. He loves Eudora, a nurse’s aide there, who is also Naomi’s best friend. Part of the plot turns on Eudora figuring out whether she loves Leo back. They all get to know each other after Miles organizes a series of discussions in which the various patients lecture their fellows on something they know from the outside world.

And the plot also turns on those discussion groups, because during one of them there’s a suspicious fire. Miles, who has become a leader in a homeland security vigilante group, undertakes the investigation and, partly because he is jealous of him, throws suspicion on to Leo. Circumstantial evidence supports his theory.

Tamarack Lake is not an otherworldly place like Hans Castorp’s magic mountain. The novel considers issues of class and origin, and Leo is suspected partly because he is German. (An irony, of course, is that had he stayed in Germany, and lived long enough, he would have been a victim there because his mother was Jewish.) The Great War does not stay out of patient’s lives—one measure of the repression they experience is their changing access to information from the outside.

Ever since I read “Ship Fever” I’ve thought of Barrett as a writer who lets the bones of her stories show, but here the bones are covered with muscle and skin, and clothed in flowing silk that shifts and uncovers, now the curve of a breast, later a glimpse of inner thigh. (To extend the metaphor, there is no fat in this narrative.) This impression is strengthened by an unusual narrative device: the rest of the patients take over the narration occasionally, becoming a shared unconscious, demonstrating how quickly an unsupported rumor can spread among a community and take on the aura of truth. Read one way, the story is an allegory of our present-day mistrust of immigrants, particularly Muslims. Read another, it’s a story of class in American life.

I keep thinking about this book, and every time I do, I come up with a new possible interpretation. Have you read it? Do you agree or disagree? Which of Barrett’s other books would you recommend? Use the comments to discuss and make your recommendations.

Video: Earthquake in New York? This 1972 TV Movie Imagined It