“I’ve always had wanderlust,” the 28-year-old Berke said in a recent phone interview. “I’m always on the move. It’s one of the things that’s really killing me about running the site professionally—I can’t ever leave.”

After attending college at Rutgers University in New Jersey, Berke briefly moved home to write for a trade magazine before skipping town for Lima, Peru. He returned, unemployed, a short time later, and noticed a gaping journalistic hole in Sheepshead Bay. But straight up reportage wasn’t always what he had in mind.

His initial idea, he said, was a blog “where you’re snarky, and making fun of the neighborhood, and complaining about it.” As he progressed, he found himself doing otherwise, if for no other reason than his readers demanded a more serious venture.

“On top of that, I kind of saw the neighborhood in a different way, and started to really enjoy being here,” Berke said. “And now I think it’s one of the best, most beautiful neighborhoods in the whole city.”

He spends his days now covering community board meetings; investigating complaints about building violations; testing out the various authentic immigrant-owned restaurants in Sheepshead Bay; and managing the small staff of writers that works for him. Last year, Sheepshead Bites was named Best Local Blogger in L Magazine‘s “Best of Brooklyn and Manhattan” roundup. Though a ride into midtown Manhattan can take upwards of 45 minutes to an hour, Berke insisted his beachfront community is “very much” a part of the city.

“I hate when people say, ‘It’s really far away,’” he said, in response to my observation that, well, it is. He added, “At the same time, we do get a bit of quiet, and spaciousness, and a kind of beauty the city doesn’t get.”

Sheepshead Bay, in Berke’s view, has an “anti-hipster” attitude; nobody is there to be an urban explorer. The population has changed since his childhood, both in number and in makeup, and is now comprised mostly of Asian and Eastern European folks, along with holdover Irish and Italian immigrants from an earlier era.

Hoping to illustrate this change, Berke told me, “Emmons Avenue used to be a place for great seafood, particularly Italian seafood. Now it’s huge for Turkish food—the best Turkish food in the city is on Emmons Avenue.”

Gone are the so-called five-and-dime stores of his youth, replaced by cell phone huts, drug stores, and other generic establishments. Rent and apartment prices have increased with the market, but also because of what Berke believes is a different sort of gentrification.

“If you run through the markers of gentrifications—the building development, the rise in real estate, the pushing out of an older population, an older demographic, and all of that—it’s all there,” he said. “But it’ll never be called gentrification because the ones doing it are immigrants, and they’re pushing out an old, blue-collar class.” 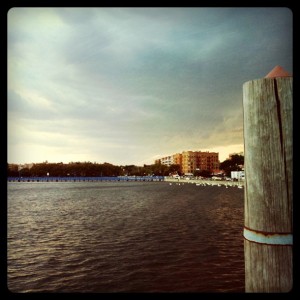 One of his biggest gripes about Sheepshead Bay is the lack of respect it gets from the city government. For instance, the bay itself is rapidly filling up with sand, “for various environmental reasons,” according to Berke, and needs to be dredged. “The community has been requesting the city dredge it for most of my life,” he said. “And it ignores us.”

Berke is also frustrated by the tourism “renaissance” in neighboring Coney Island and Brighton Beach. While he doesn’t expect Sheepshead Bay to become a tourist destination, per se, he thinks the area should be included in promotional materials for the region. “There’s also things to do in Sheepshead Bay, like recreational fishing, dinner cruises, and an excellent array of waterfront restaurants,” he said, though he was unwilling to name his favorite. (“I run a business,” he explained.)

Not long ago, Sheepshead Bites celebrated its third birthday with a party that drew more than 300 people, and Berke, who recently launched the Bensonhurst Bean, is already planning on more events, like a Brooklyn Cyclones game on August 19 dedicated to Sheepshead Bites. He’s also closely monitoring the release this week of Russian Dolls on Lifetime, a Jersey Shore-style reality show that follows the lives of various members of the Russian-American community in South Brooklyn.

“A lot of people are angry about it, especially when it comes to local Russian leaders,” Berke said. “A lot of people don’t care, and want to be engaged in the voyeurism. The consensus across-the-board is that this is in no way representative of Russians.”

As he follows this story and hordes of others, Berke’s goal is to “fill in the gaps” of news coverage in Sheepshead Bay, a neighborhood largely underserved by the mainstream media—not that he wants (or needs) their attention.

“The vision of the site from the very start of me doing it professionally wasn’t just to build an online community for people to learn about and talk about Sheepshead Bay,” he said. “It was to also create a sense of community, and implement it on the ground.”

Besides, he added, “If there’s some place I’m going to be stuck, it’s definitely not the worst place.”

Coming from a Brooklyn native, that’s one hell of an endorsement.

The Pigeon Keepers of Bushwick