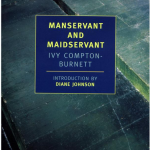 Victorian gentleman Horace Lamb lives with his wife, Charlotte, and their five children in a small English village. His household maintains not one but two poor relations, Horace’s cousin, Mortimer, and their aunt, Emilia, who was born and has spent her entire life in the house they share. They also have a full complement of servants: a butler, Bullivant, a cook, a footman, George, and a kitchen maid Miriam. (The housemaids have no speaking parts in this drama.) A tutor, Gideon Doubleday, comes in daily to educate the children, who spend much of their day with Nurse. Doubleday lives with his mother, Gertrude, and sister, Magdalen. And, on occasion, everyone stops in to Miss Buchanan’s shop, either to pick up some small sundry or to collect the letters that Ms. Buchanan holds for them.

Life might be idyllic, but Horace struggles with the fact that the money to maintain this household comes from his wife’s family, and he is determined to hold on to it so it will last as long as possible. Unfortunately for his relatives, this means that he cannot bear to part with any money. Everyone is cold in winter, and the children wear threadbare clothes that are much too small for them. They know that their clothes and lives are the subject of comment among the townspeople, but do not know what to do about it. The word an earlier generation would have used to describe Horace is ‘mean,’ in the sense of cheap, but Compton-Burnett quickly makes clear that Horace’s behavior can easily be described by current usage as well.

Despite the distance in social status, the Doubleday family and the Lambs become friends. And Miss Buchanan becomes a regular visitor to the Lamb servants’ table, trading observations, mostly about George and Miriam and their behavior, with Cook and Bullivant. While Charlotte is away on a lengthy visit to her family, everyone notices that Horace’s attitude changes: there is more coal for the fires, the children have new clothes. Most importantly, Horace unbends enough to begin to develop a real relationship with his children, though not so much that they fully trust in his benevolence.

What has brought on this change and will it last? That’s the crux of the novel, which turns on a letter gone astray, several romances, and a bit of wishful thinking among the children. This is a very interesting yet spare novel, told almost entirely in dialogue; with no stage directions, the reader must be attentive to scene shifts and exits. I found it interesting but I think that one of Ms. Compton-Burnett’s novels is enough for me; as Diane Johnson puts it in her introduction, “some people have found that her twenty novels are much like one another . . .” Do you agree? Let us know in the comments.