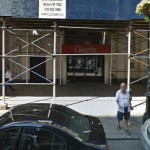 While the north side of Montague Street, between Clinton and Court, has been obstructed with scaffolding for what feels like forever, it seems that a bargain cannot be hidden. According to a story in The New York Times, “At Chipotle, an Unofficial and Prohibited Discount for Officers” that talks specifically about the Brooklyn Heights locale, uniformed police officers are offered a 50% discount.

Is this cool with you? Vote in our poll after the jump

The article notes that “the Police Department’s lengthy Patrol Guide does not specifically refer to free, or steeply discounted, food. But officers are taught that food is covered under the Patrol Guide’s prohibition against accepting gratuities ‘or other compensation for any service performed as a result of or in conjunction with their duties as a public servant.’” A commander told the Times, “That policy covers the food issue. There should be no discount—heavy or light—whatsoever.”

The general manager of Chipotle Mexican Grill, however, characterizes the discount as a “courtesy.” What say you?