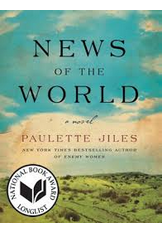 They pop up in old stories, every once in a while, a child with blue eyes living among Native Americans, a survivor taken along after a raid, and there are historical records European children raised among Native Americans. A few of those children returned to their families. In her elegiac and poignant novel “News of the World” Paulette Jiles imagines the return home of one such child, blending her depiction of the psychological pressures with a portrait of a man whose moves through his life illustrate the connections that can be made among people of vastly different ages and cultures.

in 1870 Captain Jefferson Kidd makes his living reading from the newspapers to the inhabitants of the towns through which he passes. Kidd rides a regular route through Texas, up to Wichita Falls in the north and back down south to San Antonio. He’s past 70; his wife has died; his children live in Georgia, though he hopes to coax them home soon. Texas, recently part of the Confederacy, is still under martial law. Captain Kidd fought in the Georgia militia during the War of 1812, ultimately serving as a messenger. After the war he bought a printing press and settled in San Antonio as a printer. He returned to the Army during the Mexican-American War, this time to organize the couriers.

Kidd is a smart and cautious messenger, tailoring the stories he picks to each town’s politics and atmosphere. In Durand, for instance, where political passions still run high, he reads about railroads and tulip bulbs, but tries to avoid local politics. Kidd thinks hard about his customers and, Jiles says, “he had come to think that what people needed, at bottom, was not only information but tales of the remote, the mysterious, dressed up as hard information . . .Then the listeners would for a small space of time drift away into a healing place like curative waters.”

On one of his runs, Captain Kidd brings along a passenger: Johanna, a 10-year-old girl. She’s been living with the Kiowa since she was captured four years earlier, but now the Kiowa have been persuaded to return her, and Kidd agrees to bring her back to her family outside San Antonio. Johanna’s parents were killed in the raid, and now she’s been taken from the Indian woman who raised her. So it’s no wonder that she trusts Captain Kidd not at all. Johanna speaks Kiowa, and, the captain eventually figures out that she remembers a little German, but knows no English.

Jiles’s writing is supple and fluid. “News of the World” is an adventure story – the pacing makes it hard to put down – but it’s also the tale of a man’s passage through the world. Don’t miss this beautifully written novel.

News of the WorldPaulette Jiles