Brooklyn Bugle Book Review: “Bad Boy: My Life on and Off the Canvas” by Eric Fischl 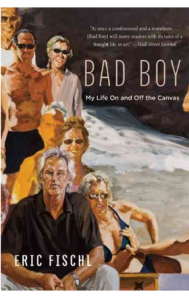 Memoirs can be tricky to write: assuming one’s history has been public or interesting, there’s the problem of finding a voice, not too shallow, not too knowing. Then there’s the equally imposing problem of violating the privacy of everyone else in your life without alienating them. Eric Fischl and his co-writer Michael Stone have solved both problems in the clear-eyed and well-written memoir “Bad Boy.”

If you don’t know his work, Fischl is an American figurative and representational painter (and sculptor and printmaker). One of his works, A Visit To/A Visit From/The Island, a 1983 diptych, is included in the Whitney Museum’s exhibit “Fast Forward: Painting from the 1980s” on view through May 14. It’s worth heading to the museum to see this captivating painting whose subject appears to be the contrast between the grinding poverty of a Caribbean idyll and the oblivious enjoyment of the visiting tourists. Its resonance is deepened for the contemporary viewer because the painting evokes a refugee crisis Fischl could not have anticipated when it was painted. Many of Fischl’s paintings are similarly disturbing (see here, here, and here, all discussed in the book.) In Fischl’s apt description, his early paintings “dealt with the fallout from middle-class taboos, the messy, ambivalent emotions couples felt, the inherent racism, the sexual tensions, and the unhappiness roiling below the surface of our prim suburban lives.”

[T]rying to explore the emotions behind that taboo. Though I knew I was being provocative and sensationalistic, I was sincerely trying to express what it felt like to be the boy at a time of momentous change. . . . I was trying to portray that transitional state in which a boy becomes a sexual being. . .

There’s an argument to be made that the art should speak for itself, without the explanation, and on first glance at those early paintings it appears that Fischl is not a strong draftsman, though his use of color, mass, shadow and composition compensates. Unlike many artists, Fischl was not a childhood painter; he took up art only when he went to college. But his paintings are much more about what’s happening on the inside. He writes,

Painting is a process that guides me back through complex experiences that at the time I didn’t have words to describe or understand. It retrieves feelings and memories and brings them forward with clarity and resolution.

His experiences included sex, drugs, rock and roll, an alcoholic mother and distant father, and his mother’s suicide by car accident. But Fischl’s paintings are so close to our daily lives that the explanation, oddly perhaps, provides the distance necessary to engage with them more deeply.

After leaving school Fischl taught, and he sounds as if he must have been a demanding and creative teacher. He’s also thoughtful about the history of painting, and the place of his work and that of his contemporaries in it. In the late 80s Fischl gained fame and fortune – a blessing, but a decidedly mixed one, because, Fischl writes, it changed “my relationship to my work. Drawings and preparatory paintings began to look like money instead of studies . . The temptation to print money had entered my practice along with the cynicism to rationalize it.”

It’s not as if Fischl hasn’t enjoyed his celebrity – he writes of his friendships with John McEnroe (they traded tennis and painting lessons), Mike Nichols (who became a subject) and Steve Martin (ditto). Fishl’s painting has deepened and expanded since the 1980s, becoming more complex while still probing the difficult psychology behind the screens we show to the world. So it’s still not easy to look at. But it’s worth the look: as Fischl writes:

Art is cultural glue. It binds us to each other by revealing what is is we share, what we have in common on the most intimate levels of our being. But in order for art to work, an audience has to be able so see themselves in the artist’s creation . . . Artists create art because they are seeking resonance for their thoughts and feelings. They are seeking connection.

Brooklyn Bugle Book Review: “What Belongs To You” A novel by Garth Greenwell