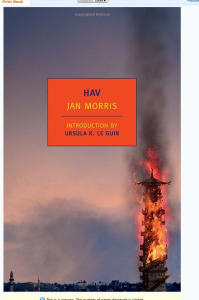 The noted travel writer Jan Morris has published very few novels, but I found one of them at the Brooklyn Book Fair, published, perhaps not surprisingly, by NYR Books, a source of many of my favorite books. “Hav” is a novel as travelogue, allowing Ms. Morris to indulge what must have been sorely tempting during her wonderful travels: a taste for the absurd.

The novel is written in two parts, “Last Letters from Hav,” first published in 1985, and covering an early visit to the mythical Hav, and “Hav of the Myrmidons,” published in 2005 describing Ms. Morris’ “return” 20 years later. In 1985, one still entered Hav the old-fashioned way, riding a train that came down through a switch-backed tunnel under the mountain. Those au courant knew to leave the train at the frontier, and get a ride over the mountains in time to watch the train emerge from its “spiralling descent within the limestone.” Perhaps it is this touch that leads Ursula K. Leguin, in her introduction, to describe the work as science fiction. But Hav is full of peculiarities that challenge the laws of physics, of politics, and of pretty much everything else.

Everyone came to Hav – perhaps even Hitler. There is a history of defeated Crusaders, their departure still noted into the 20th century. There are a Grand Mosque and a Grand Bazaar. Hav rig fishing boats are illustrated, and Hav’s local specialties include snow raspberries, in season only briefly but much loved. There are local fauna – “the Hav hedgehog, Erinaceus hav, is odd too, since it is tailed, like a prickly armadillo, and the Hav terrier is like a little grey ball of wire wool, and I believe the troglodytes breed a pony of Mongolian origins on the foot-slopes of the escarpment.” There are also Hav cattle and a Hav bear.

There is a little Russian colony, Malaya Yalta, and a thriving Chinese entrepot, Yuan Wen Kuo. Engaging locals introduce Morris to everyone else, and she goes everywhere, welcomed and feted. She visits the Hermitage, where some local anchorites welcome her. She even peeps in at a secret meeting of local Cathars, who seem to have survived quite nicely in Hav. Morris strikes out on her own to the harbor headlands, (one of several places where Hav resembles Morris’s Sydney, Australia) to visit a local landmark, the Iron Dog, a mysterious statue standing sentinel over the entry.

Back to the troglodytes. Morris visits them, too, in their caves in the escarpment, the same one the train tunnels through. She spends the night in one of the caves in her sleeping bag, and then is taken to visit the bears, which “looked just like piles of old rugs, heaped on top of one another, like the discarded stock of a carpet-seller. . . One or two rolled their heads over sleepily like cats, burying them in their paws.”

Not all is well in Hav, and Morris’s first visit ends among ominous signs. Her forebodings are borne out on her repeat visit 20 years later, described in “Hav of the Myrmidons”. Everything is changed. Hav is now the Holy Myrmidonic Republic; tourists are mostly kept to an island in the harbor, except when they have a special pass. Familiar landmarks are gone, burned to the ground, bulldozed, or built over. Morris’s friends, so open and welcoming 20 years before, barely speak to her. Poking around, Morris is able to find some of the places she had so enjoyed on her earlier visit, but leaves quickly, saddened by the changes.

Hav is not for everyone – it’s a secretive little enclave somewhere in the Eastern Mediterranean, a peninsula jutting into the Mediterranean cut off by a mountain range from some country east of Lebanon and west of Turkey. And “Hav,” which gently parodies the conventions of travel writing, might not be for everyone either. But fans of Jan Morris will find their way into this landscape of the mind by using a little imagination. Do you agree? Let us know in the comments.

Have a book you want me to know about? Email me at asbowie@gmail.com. And check out my blog about metrics for people who hate numbers.