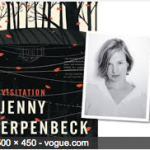 Twentieth century Germany lost two world wars, murdered many of its own citizens, and surrounded part of its former capital with an enclosing wall. Armies, its own and occupying ones, marched across the countryside. A novelist can’t ignore this history, but life has gone on all the same. In her moving and painful novel “Visitation” Jenny Erpenbeck focuses her story on the same location, a glacial lake just outside Berlin, and the slow development of the land. The lakeside changes from country village to farm country to vacation villas for city dwellers over the course of a century or so. That’s longer than a human life, but several of the characters appear and reappear at different times in their lives.

Foremost among those is the Gardener. He has “always lived there, everyone in the village knows him, and yet he is only ever referred to by both young people and old as The Gardener.” It’s as if he needs no other name; he is a watcher, and takes care of the houses and gardens when they are shut up for the winter or other purposes.

The architect has worked hard on his house, putting in stained glass that throws colored reflections onto walls and hidden doors to mask closet entries. An iron bird perches on a railing. The house pleases the architect and delights his wife – though she must endure part of the war there. Unfortunately, it’s the part that involves the Red Army’s march to Berlin. (The lake is located in what eventually becomes East Germany.) The architect’s thoughts, as he hides valuables before he flees to the West, recall his happy memories, not his wife’s memory of “that hole the Russian drilled in her eternity near the end of the war.”

The architect bought the house from a family of Jews, forced to sell. He justifies his role as it helped them flee, but we learn during the course of the book that not all of the extended family escaped. Eventually, after reunification, the house passes to another extended family, with a grandmother who spent some of her youth as a refugee. Where is a refugee’s home?

In peacetime it was poverty, during the war it was the front that kept pushing people before it like a long row of dominos, people slept in other people’s beds, used other people’s cooking utensils, ate the stores of food that other people had been forced to leave behind. It’s just that the rooms became more crowded the more the bombs fell. Until in the end she arrived here, in this garden . . . When you’ve arrived, can you still be said to be fleeing? And when you’re fleeing, can you ever arrive?

The book is as difficult to read as anything by Curzio Malaparte, yet its exploration of ordinary life in an extraordinary place well repays the reader who persists through the pain. Among the epigraphs with which Erpenbeck opens her book is an Arabic proverb: When the house is finished, Death enters. I would add, with Eliot, “In my beginning is my end.” What do you make of this challenging book?