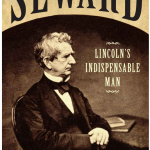 William Henry Seward is one of those people we think we know about – wasn’t he the cabinet member who closed Lincoln’s eyes saying “Now he belongs to the ages?” Nope, that was Edwin Stanton, Secretary of War. Seward had been in a carriage accident a week earlier; he was home in bed with a broken arm and a broken jaw, where he was also the victim of an assassination attempt. His most notable accomplishment, the purchase of Alaska, was derided at the time as “Seward’s folly.” Wrong again – that canard didn’t arise until nearly 10 years after the purchase was completed, and five years after Seward’s death. He and Lincoln were a matched pair, tall and skinny (after all, David Strathairn played him in the 2012 movie) and taciturn – wrong, wrong, wrong. Seward was small, but his personality was large, and as Walter Stahr describes Seward in his new biography, he sounds like very good company.

Seward was born in the small upstate New York town of Florida in 1801. Unusually for the time, he attended college – Union College, in Albany. He dropped out in the middle of his final semester, in 1819, and went with a friend to Georgia, where he helped found a school. Seward stayed in Georgia only a few months before returning to New York. Seward’s 1819-1820 visit coincided with the national debate about slavery that culminated in the Missouri Compromise. Since the visit to Georgia was Seward’s longest stay in a slave state, and Stahr notes that in 1866 Seward received a letter from a former slave claiming to be his daughter, I would have liked to know more about how this experience might have affected Seward’s later thinking. But to his credit Stahr never ventures far from the documentary evidence. An unfortunate result is that he never mentions Seward’s Georgia stay again.

Seward settled in Auburn, New York, where he married Frances Miller and practiced law. It was only a short time before Seward moved into politics. He became a New York state senator, and soon was a candidate for governor. He lost his first bid, and instead became a land agent, managing a vast tract of land in Chautauqua County. He was elected governor on a second try, in 1838. Eventually he became a senator and Secretary of State in Lincoln’s cabinet. Seward always thought about the big picture: he was influential in developing the transportation mechanisms – first canals and then the railways – that helped New York and the country to become manufacturing and economic centers.

All the political involvement kept Seward away from home much of the time. Although Stahr describes the marriage as difficult – Frances did not like spending time in Washington – it also appears to have been a devoted one. Frances was intelligent and well-read, and argued with her husband about slavery: she was an abolitionist. Seward was deeply opposed to slavery but was not an abolitionist, believing before the Civil War that slavery would eventually die a natural death.

Seward was a consummate politician, one from whom Lincoln, no slouch in that department, could – and did – learn from. To take just one example, Stahr’s description of the complex events leading up to the issuing of the Emancipation Proclamation is clear and convincing. In Stahr’s reading Seward initially opposed the Emancipation Proclamation and thought it should be delayed. Seward used the time between Lincoln’s initial suggestion to his cabinet to find out how European allies would react – and when it became clear the reaction would be positive and that Lincoln was going to issue the document Seward suggested revisions that strengthened the document.

This biography leaves the impression of Seward as an imaginative statesman who envisioned the US as a world power, and lay down the groundwork for it: Alaska wasn’t the only territory whose purchase he engineered. The Virgin Islands, Midway Island, the isthmus of Panama, Hawaii – Seward was looking at all of them for offshore ports. Even more importantly, he kept the US out of several possible wars with European powers during the Civil War. He worked well and closely with Lincoln throughout the war, on both foreign and domestic policy. As Stahr describes him:

Many people helped to ensure that the Union emerged from the Civil War as one nation, rather than splitting into two or more rival nations, but it is hard to name a single northern civilian other than Lincoln who contributed more than Seward.

Brooklyn Bugle Book Club: “The Good Doctor: A Father, a Son, and the Evolution of Medical Ethics” by Barron H. Lerner