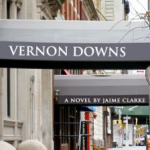 Pity poor Charlie Martens. Since his parents died without making adequate provision for him, Charlie bounced from relative to relative until he wound up at Glendale Community College, in Arizona, studying creative writing. He has never learned to plan; he just improvises until he’s out of moves. Every few years he reinvents himself in a new location. It’s almost a good-enough preparation for a writer’s life. It’s certainly good preparation for what Charlie does in this novel: move closer and closer to the life of the writer Vernon Downs. Ultimately, Charlie inhabits that life, and consequences, not all of them predictable, ensue.

Despite Charlie’s rootless and amoral existence, Clarke succeeds in making him into a surprisingly sympathetic character. It’s not so much that Charlie acts with good intentions; it’s that no one else is looking out for him. The plot is set in motion when Charlie, attempting to impress the woman he is dating, sets out to arrange a meeting with Vernon Downs, who is coming to speak at Glendale. One reasonable lie leads to another, and eventually events spin out of Charlie’s control. Charlie gets away with it, barely, but that initial success only leads him on to greater and deeper involvement.

The unpleasant Vernon Downs also engenders some sympathy. He’s turned from being a person to a persona, but all the same he doesn’t deserve to have first his apartment and then his life taken over by a dybbuk, even if he has leaned on the accommodating Charlie – and in his turn been accommodating enough for Charlie to pull off his impersonation. Clarke builds in a nice symmetry: towards the end of Charlie’s deception as Vernon he enters into an email correspondence with Shannon, an aspiring writer. Shannon, in turn, stalks Charlie-as-Vernon.

Charlie is surprisingly self-aware for someone who lives so alarmingly close to the edge of disaster. If only, Charlie thinks,

he could bead his experiences on a chain, not just to memorialize them in print for posterity, but to search them for threads of meaning or instructive themes.

It’s Charlie’s complete inability to do so that leads him into disaster. Clarke himself is more successful, developing what at first glimpse is another story about the challenges facing aspiring writers into a rich story of the effects of obsession both on the object and the obsessed. “Vernon Downs” is a surprisingly compelling and entertaining novel.

REMARKABLE INFORMATION! Baseball is Back, Staples an’ all!

Tell the Bartender Episode 32: A Series Of Firsts