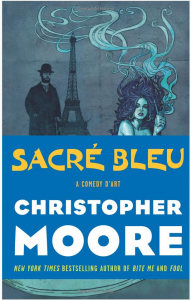 In Paris, in the second half of the 19th century, the painters Henri de Toulouse-Lautrec, Pierre-Auguste Renoir, Henri Seurat, Paul Gauguin, Claude Monet, Camille Pissarro, the art dealer Theo van Gogh, and assorted others, among them the fictional baker and painter Lucien Lessard, try to track down someone they call the Colorman, who they fear might be responsible for the death of Vincent van Gogh. (Set aside the fact that you know that Vincent van Gogh committed suicide – this is fiction, you are suspending disbelief for the moment.) In their search, the painters visit cafes, nightclubs, prostitutes, the Lessards’ bakery, and a father and son known as Les Professeurs Bastard. The action moves back and forth between Paris, Arles, and a few other spots where painters may have congregated. It also jumps between time periods – not just back to 20 or 30 years earlier, times in the memory of the characters, but, occasionally, by hundreds of years. (Remember the blue-painted Picts in Braveheart? Can you think of anything else colored blue? It probably makes an appearance, if it’s in Europe.)

The Colorman, you see, though he looks human, is some sort of supernatural being. He has as a familiar a woman, who often functions as model, lover, and, above all, muse to the male painters (and sometimes doubles as the female ones–but there are so few of those.) The artists search for him in all the usual places: the Paris sewers, the old mines under Montmartre, the Seine river banks in Paris and in Giverny. Oh, and there’s an additional motivation – the men are constantly seeking to reconnect with the one model who inspired them to do their best work, and she is connected, somehow, with the Colorman.

I expect that some readers will find this an entertaining book. I found it supremely silly, but maybe that’s just me. In an afterward, the author worries that he might have ‘ruined art for everyone.’ Well no, not exactly. I’d be more worried about the writing. Here’s an example:

Behind the marble-topped bar [of the nightclub Le Chat Noir]  was an enormous mural by Adolphe Willette, a cartoon, really, depicting a modern-day baccanalia, with bankers in tailcoats gunning each other down over half-naked, fairy-winged showgirls at the margins, while the bulk of the revelers danced, drank, and groped in a maelstrom of obvious debauchery in the center. It was a satirical indictment of Le Chat Noir’s clientele, Paris patricians slumming on Montmartre with their working-poor mistresses, the artist, Willette, simultaneously celebrating the joie de vivre and biting the hands that fed him.

This is belt-and-suspenders writing by someone who doesn’t trust his readers to keep up with him. Do you agree? Unlike me, but like ‘Playboy’ and ‘The Onion,’ did you think this was an uproariously funny novel? Let us know what you think in the comments.