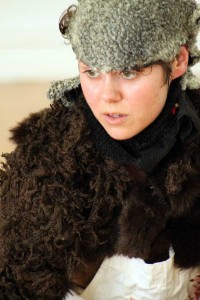 Dance and performance artist Carrie Ahern brings a whole new meaning to the phrase “you are what you eat” with her current project that delves into the connections between humans and the animals that many of us consume.

“For years, this question about sustainable food had been bothering me,” says Ahern, a Wisconsin native who moved to Brooklyn 17 years ago and currently resides in Ditmas Park. “I just felt so disconnected from going into a grocery store and buying a piece of meat and not really understanding where it came from.”

A growing interest in the origins of her food prompted Ahern to seek hands-on experience in the “farm to table” process back in 2010. The undertaking resulted in a bicoastal journey that involved hunting for Sika deer in the swamplands along the Eastern Shore of Maryland in the autumn of 2010 and then heading to Seattle, Washington a few months later to learn the art of butchering at Rain Shadow Meats. Ahern eventually spent a day slaughtering chickens at Stokesberry Farm in Olympia, Washington before returning to Brooklyn. Here, she has continued to perfect her butchering techniques at Williamsburg-based Marlow & Daughters.

Ahern’s forays into hunting, butchering and slaughtering serve as the main basis for her new work, “Borrowed Prey.” Though Ahern initially set out to better understand her own relationship with the “farm to table” process, the project took on a broader dimension during the course of her research.

“I felt like I really needed to be able to kill an animal if I was going to eat it… I really was so curious about what that experience would be like and if I would be able to eat meat after it,” Ahern notes. “But what ended up happening right away is I realized it is a project about empathy, more than anything. And it is a project about connection.”

The performer is creating “Borrowed Prey” as a diptych, with part one focusing on human-to-animal empathy and part two centering on human-to-human empathy. 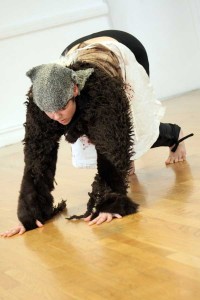 Ahern began choreographing the first part of “Borrowed Prey” during her stay in Seattle last year, often walking straight to her studio after a shift spent carving up carcasses at Rain Shadow Meats. There, her roles as researcher and dancer became fascinatingly intertwined, as Ahern explains. “I started making the movement when I started the butchering,” she says. “So it comes directly out of my experience with all the research… putting it in my body and seeing what would come out.”

The result is a stunning work in which Ahern embodies both predator and prey, right down to her costume by Naoko Nagata that pairs a woolly, pointy-eared hood and furry shrug with a butcher’s apron splattered with fake blood. During a rehearsal at Brooklyn Arts Exchange in Park Slope, Ahern skillfully shifted from the limp stillness of a carcass on a butcher’s table to the playful strokes of a cat toying with a mouse to the skittish hops of a scared deer. Her movements were accompanied by a hauntingly beautiful score by composer Anne Hege that eventually gave way to an eerily distorted recording of Ahern reading text by Dr. Temple Grandin.

Grandin, an autistic and renowned animal behavior scientist, played an important role in the creation of Ahern’s new work. The scientist’s published findings serve as the fourth strand of research (along with Ahern’s hands-on studies of hunting, butchering and slaughtering) that informs part one of “Borrowed Prey.”

“Temple Grandin helped to answer some of the questions that we have about us versus animals,” Ahern notes. “Do animals think? Do they feel?”

Ahern hopes to get people thinking about these questions and many more by taking them along on a 55-minute sensorial journey filled with dance, music, spoken word, interactive touch experiments and open dialogue that leads up to the butchering of a lamb at the conclusion of the work.

The setting for Ahern’s upcoming performances will also provide rich stimuli, as the show will take place inside an actual butcher shop – Dickson’s Farmstand Meats – complete with pungent orders, a massive sausage grinder and a hefty butcher block that will serve as the dancer’s stage at times. Ahern plans to add her own touches to the space with the help of set and lighting designer Jay Ryan. Even such simple decorations as rawhide bundles dangling from the ceiling will serve to further Ahern’s examinations on the inescapable cycles of life and death, as she plans to fill them with decomposing flowers. 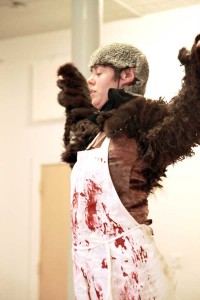 “Every aspect of the project is trying to get people more connected,” Ahern says. “It’s not that we just don’t ethically understand where our food comes from, it’s also that we’ve lost something in culture because we don’t participate in that process… by having a connection and empathy, there is more of a wholeness to our lives.”

Ahern will be performing part one of “Borrowed Prey” at Dickson’s Farmstand Meats in Chelsea Market on select nights from April 26 – May 13. Tickets are available for purchase at Brown Paper Tickets. 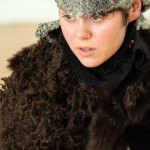 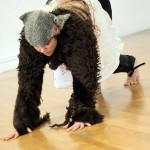 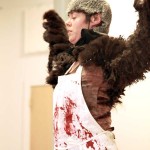 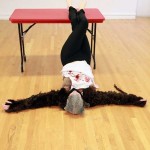 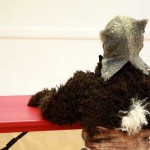 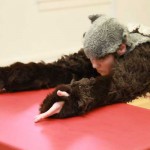 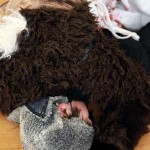 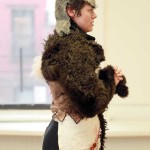 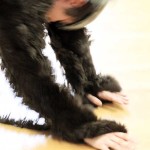 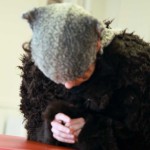 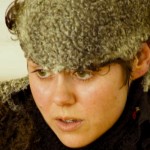