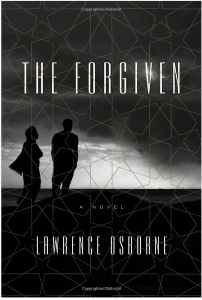 We live in a culture that is mobile and global, and we travel through exotic locales feeling that we are privileged and cultured. The premise of Lawrence Osborne’s novel “The Forgiven” that people will travel from Europe to a three-day party in the central Moroccan desert seems eminently reasonable. Jo and David Henniger have taken a plane to Spain, a ferry to Africa, and rented a car to attend a party. David’s school friend Richard Galloway and his partner Dally Margolis are throwing an elaborate weekend party at their Moroccan retreat, built out of an abandoned village or ksour.

Osborne describes Richard and Dally with a local’s eyes:

Les visiteurs, as they were called. Tall, golden men with bright eyes and fussy, incomprehensible tastes. They could have stepped off a ladder dropped from the sky for all the people of Azna knew. The term visitor also implied that at some point in the merciful future they would depart just as suddenly as they had arrived. It was admitted that they were wealthy and that they spent their money in an exceedingly unwise and profligate way, and that this was much to the advantage of the people.

Aside from tourism, the main business of the Moroccans in the book is the sale of fossils they have dug from the desert, which was once, millennia ago, a sea. The locals regard the fossils as the remains of devils. The Europeans view the locals as “repressed and enraged. They treat their women like donkeys.” Transactions are a good enough basis for everyone to get along.

On the long drive south, after a surprisingly bibulous lunch, David and Jo hit and kill Driss, a young Moroccan, who has tried to flag down the car. Not knowing what else to do, Jo and David bring the body to the party with them, but word has got back to Abdellah’s, Driss’ father, in his village, even further south, just at the edge of the desert. Abdellah shows up the next day to collect the body. Hamid, Dally and Richard’s major domo, manages Abdullah’s visit and his demand for some kind of compensation. The upshot is that David must go with Abdellah as he takes the body south for burial. David hesitates, but understands that he must make this compromise with the culture.

As Osborne proceeds through this layered novel, he uncovers much to be forgiven. Jo and David’s marriage is rocky. They have not so much disturbed the party as disrupted the surface compromise that allows the two cultures to profit from each other. But Driss is not entirely the innocent he appears either. As he digs deeper, Osborne exposes the many conflicts underlying the various relationships he describes. Betrayals of religion, culture, family and particularly money – what people with money may do, what other people must do for money – are brought to life with subtlety and savagery.

The heat, the desert landscape, and each side’s complete obliviousness to the other’s point of view make “The Forgiven” a fascinating and thought-provoking novel. Do you agree? Let us know in the comments.