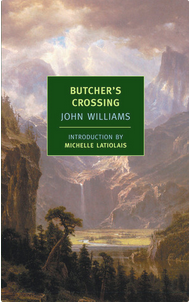 Dedicated fans of John Williams’ novels “Augustus,” (1972, reviewed here), and “Stoner,” (when the book was published, in 1965, the word stoner had not taken on its present-day connotations) should by all means read his earlier novel “Butcher’s Crossing,” first published in 1960 and now available, like the others, from NYRB. “Butcher’s Crossing” tells the story of Will Andrews, the Boston-born son of a minister, who in 1873 has left Harvard after three years and made his way, by coach and rail, to the town of Butcher’s Crossing, somewhere north of St. Louis and a jumping-off point for hunters and others heading west. With the opening of the first transcontinental railroad in 1869 railroads were spreading across the country, but huge unsettled spaces and large herds of buffalo remained. Andrews has some capital, and he’s intent on fulfilling a vision of wildness Williams describes as:

. . . a freedom and a goodness, a hope and a vigor that he perceived to underlie all the familiar things of his life, which were not free or good or hopeful or vigorous. What he sought was the source and preserver of his world, a world which seemed to turn ever in fear away from its source, rather than search it out, as the prairie grass around him sent down its fibered roots into the rich dark dampness, the Wildness, and thereby renewed itself, year after year.

Andrews invests a chunk of his capital in preparations for a buffalo hunt, trusting the patter of a Mr. Miller, who has seen great herds of buffalo in a remote mountain valley. Andrews joins the expedition, and Miller brings along Charley Hoge, who is missing a hand, as cook and drover, and Fred Schneider, an expert skinner. Andrews keeps following Miller’s decisions, though even he knows they’re questionable: to head directly west rather over the prairie rather than stick with known routes along rivers. To massacre an entire herd of buffalo for their skins, leaving the meat but nothing else, not even survivors to repopulate the herd. To stay in the mountains even as winter closes in.

Fortunately Miller, Schneider, and Andrews himself are strong and resourceful, and they survive the ensuing disasters. Their trials only multiply when they emerge from the mountains: the world has moved on, not caring about their travails. The pace of the narrative is very slow, as Williams describes their long trip in exquisite and disturbing detail, but the concentration and work required of the attentive reader is more than repaid in vivid descriptions and thought-provoking scenarios. The book anticipates many of the issues we’re struggling with today, including environmental, habitat, and species destruction and the impact shifts in economic trends have on every participant in every interconnected marketplace. Will Andrews’ reflections at the end of the story bring to mind Nick Carraway’s, and this reader found “Butcher’s Crossing” to be a worthy and remarkable bookend to “The Great Gatsby” in its depiction of the cost of the American experiment.

Do you agree? Let us know in the comments. Have a book you want me to know about? Email me at asbowie@gmail.com. I also blog about metrics at asbowie.blogspot.com.