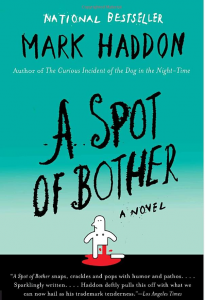 “A Spot of Bother,” by Mark Haddon, tells the story of George, who has just retired and his wife, Jean, who finds it rather inconvenient to her extracurricular love life to have him underfoot. They have two adult children. Katie, their daughter, is divorced with a very young son. She is engaged to Ray, whom everyone, (even Katie, though she is reluctant to admit it) feels is not quite suitable for their family. Her brother, Jamie, is also struggling romantically, unable to commit to his boyfriend, Tony. And Jamie believes that neither parent has come to terms with his sexuality. Oh, and George is bothered by a dry patch of skin on his torso. His doctor assures him it is nothing to worry about, but George is convinced it is skin cancer, and worries frantically, but quietly and to himself.

Keeping things to himself is typical of the way each character avoids problems, and as a result there are a lot of secrets, and a lot of fragmentation, in this family. Since it is also a tight-knit family all of these issues are played out in the months leading up to the wedding of Katie and Ray. Katie fights with Ray, Jean, George, and Jamie; Jamie and Tony break up. The wedding is off and then on again; family members have trouble keeping up, but the reader won’t. Jean and George don’t so much fight as wage a somewhat unconscious war of attrition against each other. George quietly loses his mind, but not so anyone really notices. Fortunately, everyone loves Katie’s son Jacob, who steals almost every scene he marches through.

Haddon tells his story through short, choppy fragments, shifting points of view from one to another of his protagonists. (Happily he is not so cute as to include Jacob’s version of events, though sometimes his mother relates Jamie’s thoughts.) Haddon is a very funny writer. Here’s one example:

Jamie wondered, sometimes, if Tony had been a dog in a previous life and not quite made the transition properly. The appetite. The energy. The lack of social graces. The obsession with smells . . .

Eventually, George takes actions that everyone must notice, and the responses to them allow the story to wind down to a satisfying conclusion. And, ultimately, Haddon takes a very British approach to psychology: when it is time to stop behaving in a certain way George, well, stops. (Here we call this cognitive-behavior therapy.)

Haddon, whose previous book was “The Curious Incident of the Dog in the Night-time,” raised expectations with that unusual work. He has more than met them here. Do you agree? Let us know in the comments.

A Spot of BotherbbmMark Haddon