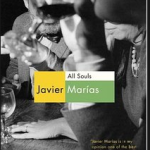 by Alexandra Bowie
Relationships outside of family often come into existence through the expedient of contiguity, and may simply disappear once the the contact ends. It’s a resonant theme that has provided the grist for many stories about shipboard or vacation romances (and the risks they entail). The unnamed Spanish novelist who narrates Javier Marias’ engrossing novel “All Souls” is writing about a period he spent as a visiting scholar in Oxford a few years earlier. (According to John Banville’s introduction, the resonance goes deeper: Javier Marias himself spent a few years in Oxford in the 1980s.) Looking back on his years in Oxford and the relationships he formed there the narrator reflects on the paradox that while his relationships in Oxford were profound, few survived his return to Madrid.

Marias introduces most of his principal characters at a High Table dinner. (The chapter describing the dinner is hilarious and spot-on. Here’s one example:

These suppers take place once a week in the vast refectories of the different colleges. The table at which the diners and their guests sit is raised up on a platform and thus presides over the other tables (where the students dine with suspicious haste, fleeing as soon as they have finished, gradually abandoning the elevated guests to their solitude and thus avoiding the spectacle the latter end up making of themselves)…)

Characters present at the dinner include: Clare Bayes, with whom the narrator carries on a lengthy and delirious affair; and her husband; Cromer-Blake, the narrator’s best friend in Oxford; and Toby Rylands, an eminent and about-to-be emeritus literary scholar. The affair ends prematurely when Clare’s young son must leave his boarding school to recuperate from a mysterious illness, mysterious at least to the narrator, keeping Clare busy and preoccupied. The narrator must have been irritated at the time the events occurred, but in his recall sounds more puzzled that Clare would choose her son over him.

The narrator also forms an important relationship with Alan Marriott, who tracks the narrator down through a used bookseller – the narrator is searching for the narrowly-known works of a favorite author – and persuades him to join a subscription society devoted to the works of a different writer. For a reason he cannot explain to himself, the narrator agrees to pay a quarterly subscription. At the very last moment of his visit, however, Marriott mentions another writer, Gawsworth, who interests the narrator rather more. He delves into Gawsworth’s background, and begins to amass a collection of his works. The narrator is interested more in Gawsworth’s character than his works, and what he finds when he traces him comes as a bit of a surprise, both to the narrator and the reader.

“All Souls,” as might be expected in a book named for the most recondite of Oxford colleges, is not an action novel. Instead, it’s a lengthy contemplation of what makes a relationship stick – besides regular contact. Looking back, the narrator describes his time in Oxford as a time of unease, and observes his most reliable and lasting relationship is not with his lover. It’s a deeply satisfying and interesting novel for the committed reader.

Brooklyn Bugle Book Review: “Food and the City: New York’s Professional Chefs, Line cooks, Street Vendors, and Purveyors Talk About What They Do and Why They Do It,” an oral history by Ina Yalof