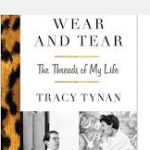 Tracy Tynan, the daughter of the novelist Elaine Dundy (“The Dud Avocado” reviewed here and “The Old Man and Me”) and the theater critic Kenneth Tynan remembers clothes the way foodies remember meals: front and center. For Tynan, clothing is a sensual as much as a visual experience: her mother’s sealskin coat, Tynan tells us, “smelled of her–a mixture of her perfume, Ma Griffe, and her cigarettes, unfiltered Pall Malls. The idea that my mother could be present in a piece of clothing where she otherwise was not was a revelation . . . The glossy brown fur had a velvety touch.” (Tynan was born in the early 1950s, and this event took place when she was four or five, long before we worried about smoking, or seals.)

Clothing gives Tynan a sly way to structure her entertaining new memoir. Tynan’s parents were much too busy with theater openings, dinners, and parties (and recovering afterwards) to pay much attention to her and Tynan was brought up by “a string of au pairs” who introduced languages, and other cultures, and to some extent love, into her life. Dundy did take Tynan shopping for clothes, but says, “My mother and I didn’t know how to be with each other, as we seldom spent time alone together. Shopping for clothes was one of the rare occasions when we did, and those expeditions were awkward and uncomfortable.” Tynan describes Dundy’s impatience and distraction: “I felt she couldn’t wait to get back to her own life–working on her novel, hanging out with her friends, having cocktails.” Tynan took her time. Of one expedition she says: “The rack of shirts looked enticing, but as usual with my clothing choices, I was looking for something specific, but I didn’t know what it was yet.”

Around the time Tynan was 14, Dundy gave up, and Tynan received a quarterly allowance to spend on clothes as she wished. She blew the first quarter’s allowance on a pair of “beautiful, soft, supple” apple green shoes that fit perfectly. By then, Tynan was in boarding school, no one would know she couldn’t buy any new clothes. It didn’t matter. “In a world where most everything else felt out of control, having control over the clothes I wore filled a hole.”

The Tynans divorced when Tracy was about 12, and her father whirled off into a new life that involved a new wife and additional children. Once she finished school Tynan went off to the US, settling in Los Angeles. She had a long career as a costume designer in films (“The Big Easy, “Breathless”) often working with her husband, a director. In the last years of his life her father and his second wife joined them. Tynan reconciled with her father and got to know her half-siblings. She had two children of her own, including one born prematurely, whose birth and early life Tynan describes in a harrowing chapter titled “The Pink Knitted Cap.” Her parents aged and died. Not quite retired, Tynan volunteers as a stylist for an organization called “The Glamour Project” that visits shelters, cancer treatment centers, and rehab clinics and “gives the women a day of respite from the sometimes gloomy isolation of their lives.” A day of makeup, dressing and movie-star lighting that, Tynan says, may not change the world but makes people feel better. “It makes me feel good, too” she concludes.

Perhaps it’s unsurprising that the daughter of two sparkling prose stylists found her creative outlet in a different medium. Readers like this one, drawn to the book because Tynan’s parents, are in for a marvelous introduction to a new world and a satisfying description of a life well-lived.