The 13th Apostle by Dermot McEvoy 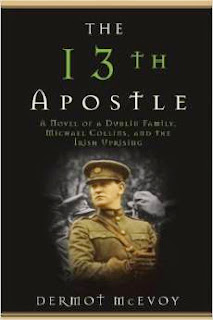 One thing about historical fiction: if you know anything about the history, there are no spoilers. When I picked up The 13th Apostle, I knew how it would end. Michael Collins would die by an assassin’s bullet. I knew it was because of a dispute that had torn the newborn Irish nation asunder, and that the dispute was over whether to accept the terms of a deal with Britain that would allow six northern counties to remain under the Crown. What I didn’t know was Collins’ role in negotiating that deal, and that he died defending instead of opposing it. What little I knew of Collins made me think he’d have been on the other side: an all-or-nothing-ist  instead of a pragmatist.

In his conduct of the struggle to free Ireland, in which his efforts were essential to bring about the conditions that brought Britain to the truce table, Collins was, as the book tells, a consummate pragmatist. He knew just what needed to be done, and how, to undermine the foundation of  British power. He was also, however, not averse to taking risk, sometimes with respect to his own safety. The lot of being the confidante who sometimes must try to talk sense to Collins falls, in the novel, on a fictional character, Eoin Kavanagh.*

The 13th Apostle is a novel told from two points of view. One is that of Eoin Kavanagh who, at fourteen, was a resident, along with his parents and three younger siblings, in a dreadful Dublin building called The Piles. The misery of his family–he lost a younger brother to diphtheria and his mother shows signs of the tuberculosis that will end her life early–makes him sympathetic to the Feinian cause. On Easter Monday 1916 he gets caught up in the excitement and joins the rebels. A bullet grazes one of his buttocks. Lying with the wounded he draws the attention of Michael Collins and of a nurse, Róisín O’Mahony, four years his senior, who tends to his bleeding bottom. From this inauspicious beginning he has an improbable but not inconceivable career. He becomes Collins’ assistant, adviser, and a supernumerary member of his “Squad” who do the targeted killings necessary to advance the liberation of Ireland. The Squad were called “The Twelve Apostles”; hence, the novel’s title. He marries Róisín, and after Collins’ death they emigrate to New York. He settles in Greenwich Village, takes American citizenship (without losing the Irish, from the viewpoint of its government), gets into politics, is elected to Congress, and becomes a confidante of FDR (as Róisín becomes one of, and a ghostwriter for, Eleanor), but after the assassination of JFK decides to leave his adopted country and return to Ireland. There he’s elected to the Dail (the Irish parliament) and supports the cause of liberating the Six Counties from British rule.

The other viewpoint is that of Eoin’s grandson, Eoin Kavanagh III, called “Johnny Three” because Eoin, pronounced “Owen,” is the Gaelic equivalent to John. He’s a writer, lives in the Village, drinks at the Lion’s Head, and is married to Diane, a Presbyterian who loves him dearly but is often amazed, and sometimes dismayed, by his and his family’s Irish ways. Actually, Diane, along with Róisín, should probably be added as point of view characters, because their observations are vital to the development of the story.

The story begins with old Eoin’s death, in Ireland, at the age of 105. As he was the last surviving veteran of the Easter Rising, as well as a distinguished statesman in his later years, his funeral is a major occasion. Johnny Three and Diane attend, and learn that the old man’s legacy to Johnny included a set of diaries, kept from his participation in the Easter Rising through his years as Collins’ assistant and Squad member, Collins’
death, and its aftermath.

The novel’s narrative shifts between Johnny Three and Diane in 2006, and Eoin from Easter Monday, 1916 to August of 1922, with a few snippets of his later life in America, including a meeting with FDR and Churchill on Christmas Eve, 1941, with the U.S. newly allied with Britain against the Axis. It’s Eoin’s second meeting with Churchill, his first having been during the 1921 treaty negotiations, when he served as Collins’ bodyguard. With a little prompting, Churchill remembers this. Churchill and Collins, on whose head Churchill had once put a ten thousand pound reward, came to respect and like each other as men of action. The 13th Apostle includes a true anecdote featuring Churchill’s rapier wit that I hadn’t known before. I won’t spoil it by repeating it here.

While the shifts in locale and time may sound disorienting, they provide a useful perspective. Johnny knew his grandfather had been a rebel, and an associate of Collins, but didn’t know he had participated in the executions of British agents and their Irish collaborators. Diane found it hard to believe that the man she knew as a stand-in father-in-law (we learn little of Johnny Two, other than that he evidently abandoned his son) was a killer. When we see it from Eoin’s perspective, we find how hard it was for him to square his moral convictions with his duty to Ireland and Collins, even when his first fatal shot is into the head of the man who tortured and killed his father.

I learned much history from reading The 13th Apostle, and got a sense of what it was like to have been in Dublin during the years that the Irish Republic, “a terrible beauty” in Yeats’ words, was born. I also learned the words that must be said to make a perfect act of contrition. This book may yet be my ticket to heaven.
_________
*The character of Eoin Kavanagh seemed so realistic to me that I did a web search for the name, just to see if there was someone with that or a similar name who was prominent in the Irish rebellion. I found this article by Owen Kavanagh (“Owen” is an alternative spelling of the Gaelic “Eoin”) giving the results of his research into the involvement of members of the Kavanagh clan in the Easter Rising and subsequent struggle for liberation. He mentions the brothers Michael and William Kavanagh as having participated in the Easter Rising and later in the fight for independence, a Sean Kavanagh as having been Collins’ intelligence officer in Kildare, and a Seamus Kavanagh as having been among the rebels in the General Post Office on Easter, 1916. Owen Kavanagh’s source of information was:

a set of six…CD’s contain[ing] Dublin Castle’s secret surveillance files, known as Personality Files which were compiled by the Special Branch of the Royal Irish Constabulary (RIC) and the Dublin Metropolitan Police (DMP).

His account ends with an “Author’s Note” mentioning the execution of Alan Bell, a bank examiner sent by the British government to ferret out the accounts holding Sinn Fein’s funds to be used in support of the uprising. In The 13th Apostle, the fictional Eoin Kavanagh is part of the team that captures and kills Bell.  In his Note, Owen Kavanagh describes how Constable Harry Kells of the DMP, who earlier had been tracking the Kavanagh brothers, was assigned to try to find Bell’s killers. This brought Kells to the attention of Collins, who had him killed. There’s no indication, however, that any of the Kavanaghs were involved in Bell’s execution. None of the characters in The 13th Apostle is based on any of these Kavanaghs. There is, however, extensive discussion in the novel about the intelligence operations carried out by the RIC and DMP and the files they kept on actual  and suspected rebels, as well as Collins’ ultimately successful effort to gain access to those files.

Brooklyn Bugle Book Club: “A Visit from the Goon Squad” and “The Invisible Circus” by Jennifer Egan

Watch the Cone: One Man’s Struggle at the Brooklyn Heights Haagen Dazs

I Suffered for This Top Ten Song List, Now It’s Your Turn