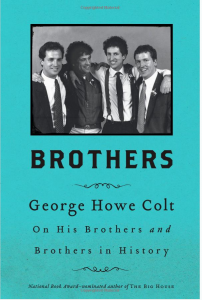 Part memoir, part exploration of sibling (mostly fraternal) relationships through history, George Colt’s descriptions of growing up as the second of four brothers serve as a jumping off point to explore various themes through the lives of brothers. Colt’s first theme is nothing if not ambitious: good and evil. His main example of a good/bad brother pair is Edwin Booth and John Wilkes Booth. Both were actors, as was their oldest brother, Junius. Edwin was famous for his Hamlet; John for more charismatic parts such as Romeo and Marc Antony. (There was a fourth surviving brother and a sister or two as well.) Edwin Booth was celebrated until the end of his life, 1893. John Wilkes Booth is – well, you know the story. Colt is fascinated by how two brothers could turn out so differently, and explores their lives in some detail. Edwin, and Junius before him, travelled as youngsters with their father, also a well-known actor, helping him, but also managing his occasional bouts of madness. John, on the other hand, “enjoyed a perpetual adolescence, right up to his death at the age of twenty-six.”

In a long chapter, Colt explores contemporary theories of sibling difference, as well as the modern canard that parents should treat their children equally. Because how can they? Different children have different needs – another area Colt explores. He doesn’t limit this chapter to the Booth brothers, but ventures as far afield as biblical brothers (Jacob and Esau and, of course, Cain and Abel), literary brothers (Waugh, Cheever, Melville) and aristocratic ones (the Duchess of Marlborough, it turns out, coined the expression “the heir and the spare” to describe her children). Even difficult fraternal relationships are lifelong (and yes, most of those fights really are about “Mom (or Dad) loved you best”). In the case of the Booth brothers, Colt says, “The actor whose most famous role was that of a man haunted by the ghost of his father was in life now haunted by the ghost of his brother.”

Colt continues this level of detail through his subsequent chapters. Some brothers fight throughout their lives (John and Will Kellogg – the imperative to outdo a brother led to the development of Kellogg’s of Battle Creek). Theo van Gogh took care of his brother Vincent throughout Vincent’s life – and Theo’s life ended, through illness, shortly after Vincent’s suicide. Other brothers work together: Colt centers this often hilarious story line on the Marx brothers. And then, sadly, there are the lost, or dead brothers.

This book is not history or social science by any means. Sometimes the chapters are overlong – but they usually interesting and always full of relevant information. Perhaps it’s because Colt is an observer and reporter (and a participant) that the Colt brothers sections are the most engaging. It might sound unreasonable given the book’s title, but as one of two sisters I kept thinking, ‘but what about the sisters?’ Colt himself has none, but several of the sets of brothers had one or more sisters. He mentions them, usually in passing, and notes that a great deal of what he has to say applies equally to sisters. That may be true of the psychological competition, but is perhaps less true of the sheer physicality of the fraternal relationships Colt experienced and describes. Do you agree? Let us know in the comments.

Have a book you want me to know about? Email me at asbowie@gmail.com. I also blog about metrics at asbowie.blogspot.com