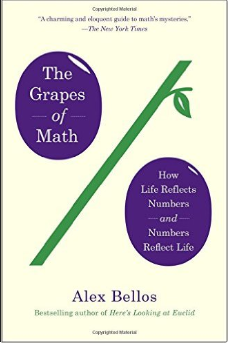 Math is full of jokes, says Alex Bellos, and he uses his recent book “The Grapes of Math” to explain what he means. Even if you don’t think of yourself as a math person, you use numbers in everyday life. Need to know what day it is, or what time the movie starts? We all need to count, and Alex Bellos starts his entertaining and enlightening romp through the world according to numbers with a brief history of counting. The first thing he counts is favorite numbers. Admit it – you have one. Most people do. Bellos relates an anecdote about an online (possibly not representative) survey he conducted asking people to pick their favorite numbers. The lowest number with no votes? 110. The highest vote-getter? Seven. That’s 7. Pi and e also got a lot of votes, and odd numbers were more popular than even ones.

After that things get even more interesting: Bellos first takes a look at why the week is divided into seven days, starting with the classical explanations (the Greeks observed seven planets, the Egyptians used a human head as the hieroglyph for seven, perhaps because of the seven orifices in the head). He then goes on to an arithmetic fact: seven is different from the rest of the first 10 numbers because “it cannot be multiplied or divided within the group.” The rest of the chapter is taken up with a discussion of the properties of numbers – not the arithmetic ones, but the properties we ascribe to them, and a study in which people were asked to indicate whether they liked, disliked, or felt neutral about the numbers 1-100. The patterns shake out into what Bellos calls prime number sieves: our favorite numbers are often prime numbers, as are numbers respondents to another survey characterized as “excitable.”

That’s the first chapter. In the following chapters Bellos discusses the frequency and statistics (in almost any document, the digit most represented is likely to be a 1); triangles,which leads to a discussion about measurement of height; cones and parabolas, with a digression into a riddle about planetary orbits Galileo Galilei sent Johannes Kepler, and another digression discussing the shape of cooling towers at nuclear plants; the startling properties of π, the ratio of the circumference to the radius of a circle, and a discussion of the path of fastest descent, which occupied the mathematicians Johann Bernoulli and Gottfried Leibniz, and the constant e, the exponential constant.

Throughout, his explanations are clear, so long as you can read graphs and charts, and illuminated with a deep knowledge of history and a dry wit. For example, Jakob Bernoulli (Johann’s older brother) sought to identify the geometry of the catenary curve. Here’s Bellos’ description

This curve–called the catenary, from the Latin catena, chain – is produced when a material is suspended by its own weight . . . It’s the sag of an electricity cable, the smile of a necklace, the U of a skipping rope and the droop of a velvet cord. The cross section of a billowing sail is also a catenary, rotated by 90 degrees, since wind acts horizontally as gravity does vertically. . . Jakob did not know the answer to his question before he asked it. After a year’s work it still eluded him. His younger brother Johann eventually found a solution, which you might assume would be a cause for great joy in the Bernoulli household. It wasn’t. The Bernoullis were the most dysfunctional family in the history of mathematics.

The later chapters include some equations, which are worth wading through (and require only high school math in any case) because they bring you through the theory of imaginary numbers to complex numbers to fractals, a set that contains miniature versions of itself and, with advancing computers, to 3D fractals (you can watch a fascinating and video about them here).

Bellos’ final chapters move from calculus, the nature of mathematical proofs, to the impact computers have had on proofs (a big impact) to computer math games, including one, the Game of Life, that has the possibility of self-replicating. It’s a fascinating concept – cellular automata follow a set of rules on a flat grid – and can result in extremely complex behavior. (Here’s a youTube video explaining some of the puzzles and patterns that can arise.) Right now there are few applications, but you never know, says Bellos: “sometimes–maybe years, maybe centuries or maybe even millenia later–new applications are found.” Math’s not really a joke, he concludes. It’s possibly the key to life, and certainly central to understanding life.

Agree, or not, let us know your thoughts in the comments.