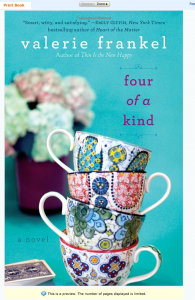 As Valerie Frankel’s new novel, set in and around a private school in Brooklyn Heights opens, Bess, mother of four and president of the school’s Parent Association, has invited Robin, a single mother, Carol, an African-American physician, and Alicia, who is Caucasian and lives above Fairway in Red Hook, to her beautifully decorated Clinton Street town house to discuss forming a Diversity Committee for the school. Although each has a child in the fourth grade, the women barely know each other, and each wonders why she was included. (Well, to Carla it’s annoyingly obvious.) Unable to find their way into the subject at hand, the women find themselves playing a form of strip poker, giving up secrets instead of clothes.

It’s a clever setup for a novel about women’s relationships. After their awkward initial meeting, the women continue to meet monthly. They continue to play– their favorite game is Texas hold-em — and we meet their husbands and children, see them at work and at home, and come to learn how each of them has ended up in Brooklyn. The kids all get to know each other better, as childcare issues (and who doesn’t have those?) mean the children are sometimes brought along, with 16-year-old Amy, Bess’ oldest child, as sitter.

As they play, the women challenge each other to be their best selves. They will all need the support, as each faces a crisis during the year. Amy angrily edges away from Bess. Alicia’s son struggles in school and her husband is out of work, adding stress to a tense marriage. Carol’s husband loses his job, and she is offered an unhappy option at work. And Robin, the single mom? She decides to try to find again the man she has long thought of as her sperm donor, with whom she had a one-night stand 11 years earlier. Sure enough, he wants to have a role in his daughter’s life.

Frankel uses her Brooklyn Heights setting well, making use of recognizable landmarks, restaurants, and of course the Promenade. The characters travel, to work, in Manhattan or Cobble Hill, to Red Hook, to Clinton Hill, and even, for one memorable and out-of-character weekend, to Atlantic City. The women’s jobs, particularly Alicia’s in a boutique advertising agency and Carol’s in the Long Island College Hospital pediatrics clinic, are convincingly described. If I have one quibble, it’s that it seems unlikely that a woman of Robin’s education and intelligence would be satisfied doing piecework for Zogby polls for a living.

Over the course of the year, not much Diversity Committee business gets done, but a lot of interesting events occur as the women struggle to support each other in the face of the challenges each faces. Each learns to rely on some facet of one of the others that she hadn’t first thought was important. “Four of a Kind” is a very entertaining and entirely believable story of four women who form a fast friendship.

Have a book you want me to know about? Email me at asbowie@gmail.com. I also have a blog about numbers for people who hate numbers.

Four of a Kindvalerie frankel