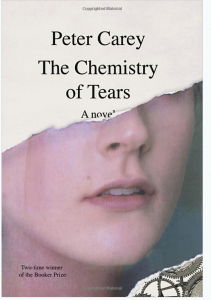 In Peter Carey’s new novel “The Chemistry of Tears” Catherine Gehrig, a horologist and conservator at the fictional Swinburne Institute in London, struggles to come to terms with the sudden death of a heart attack of her married lover, Matthew Tindall. Catherine, who is miserable, funny, and suddenly very lonely, is kept away from the funeral by her regard for the bereaved family. Matthew, whom we never see alive, only in a few emails and in Catherine’s memories, was the Head Curator of metals, and had two sons, one studying mathematics. The Head Curator of Horology, Eric Croft, was Matthew’s best friend and, Catherine discovers, knew about the affair. In order to distract Catherine from her grief, she thinks, Croft gives her a complex project to work on: restoring a mechanical duck. He also gives her something more, an assistant, Amanda Snyde.

Though she does not know the provenance of the duck, Catherine finds something in addition to its parts as she unpacks the boxes: a series of notebooks, diaries written by Henry Brandling. Brandling commissioned the duck in the mid-19th century as a distraction for his son, Percy, who was ill with tuberculosis. Brandling, who is alternately annoying and just plain silly, travels to Germany to see to the duck’s completion. Henry’s chapters alternate with Catherine’s, and, while hers are entertaining, I couldn’t wait to get to the end of his.

Catherine is tough, feisty, and funny. She is good at her job, but struggles to manage Amanda, who has a talent for drawing but becomes obsessive about the various secrets they uncover about the duck. Eric moves more and more to the background, but it is clear that there are wheels moving within wheels here, especially when it develops that Matthew’s son is Amanda’s boyfriend. Amanda begins to stalk Catherine, and breaks into her flat, and Catherine flees. In the end, the mysteries, such as they are, are resolved, and both Catherine and Amanda are able to get on with their now separated lives. Oh, and the duck which, we learn fairly early on, is actually a swan, is restored to working order. In fact, it’s a triumph: a crowd-pleasing money maker that is displayed in the Swinburne’s lobby.

I found this book to be deeply unsatisfying, the emotional crisis coming at the beginning, the manipulations becoming evident all of a sudden only at the end. Perhaps less time with Henry and more with Catherine and Amanda would have made me happier. Or am I missing something? Let me know what you think in the comments.