This is not an apology; let’s say that I am reviewing a play on appeal.

The Replacements reunion still smells like a money grab to me, and I do think the legitimacy of the whole enterprise is (at least vaguely) debatable. However, the other day when I climbed on my soapbox and waxed asinine about the Replacements, I should have included this: 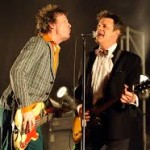 Tommy Stinson appears to jamming with Matt Smith in this picture. I doubt that happened, but if it had, it would have been uber cool, and Layne would have been as happy as a little kitten with a new ball of yarn.

The Replacements tour is making a lot of people very happy. Old fans, new fans, and Layne are enjoying the hell out of the shows, apparently the show itself is pretty goddamn good, and even people who weren’t really fans are having a great time seeing this band.

So my didacticism completely didn’t account for that factor, the joy factor, and I’m genuinely sorry. It is possible that my own archival experiences with the Replacements may have affected my ability to appreciate the pure delight people are feeling upon seeing the renascent Replacements in 2014. See, back in the day (early-ish/middish 1980s) I saw them play five terrible shows, I mean shows that really insulted both the audience and the bands’ talents; also, I have known too many people who were hurt or insulted by Westerberg; and last but most certainly not least, in the Fall of 1983 I walked into the apartment on Eldridge Street I was sharing with Jack Rabid, and found a naked Bob Stinson having sex on the kitchen floor. Please keep in mind that at that time the apartment had changed very little since Jacob Riis had photographed it in 1904 (except for the Bad Brains flyers on the wall), and just the idea of anyone having sex on that filthy neo-tenement floor would give any person, decent or indecent, the willies. Frankly, I don’t think I’ve been able to erase the memory from my mind, and it may have been contributed to development of a tumor on my optic nerve in the late 1990s (true story). So, I confess that a lot of that baggage probably got in the way of my appreciating just how much people are enjoying seeing Westerberg and Tommy Stinson on stage bashing out old favorites.

Now, I suppose I could say much the same about some of the things I said on Monday, when I ran a piece about Derek Jeter’s Holy March through the Stations of The Cross, I mean Farewell Tour. Although I still genuinely believe that the Yankees’ on-field performance has been compromised (perhaps severely) by the extraordinary amount of money the team are making by trotting Jeter around like an armless guitarist playing for the pope, I do want to say this:

This tour is making a lot of people very happy. Old fans, new fans, and Doug Herzog are enjoying the hell out of the shows, apparently the show itself is pretty goddamn good, and even people who weren’t really fans are having a great time seeing this band. 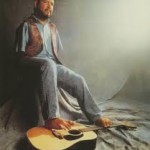 The armless guitarist who played for the Pope.

Let me add this, too: certain people have responded to my words about The Captain by pointing out that other players were trotted out past their expiration date; people keep on mentioning the great Willie Mays, who played a famously past-his-prime year for the Mets in 1973. But there are a couple of big differences: Willie Mays played in 66 games in 1973; Derek Jeter will probably play in about 150 this year. In 1973, with Mays in the line-up, the Mets made the World Series (which indicates that, somewhere, somehow, there was some method to the Mets madness); in 2014, with Jeter in the line-up, the Yankees probably couldn’t even make it to the Upper East Side to sit shiva for Joan Rivers.

There’s something else missing from all the coverage (that I have read, anyway), pro and con, of the Jeter beatification; nobody is mentioning what this whole thing was really about.

It was about A-Rod.

Every Jesus needs a Judas – remember, many interpretations of the Jesus story see Judas as a hero, because his betrayal enabled Jeter’s, I mean Jesus’ martyrdom and his resurrection; and without Judas, there ain’t no resurrection – and the Judas of this story was Alex Flipping Rodriguez. 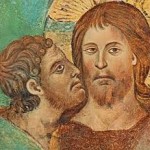 Judas, seen here kissing Jesus (artists’ interpretation). This has a LOT more to do with the whole Derek Jeter thing than you might imagine. Frankly, Jesus looks a little high to me in this picture, or maybe he just took too many Benadryl.

One of the greatest players of his time is exposed as an addict, a charlatan, a liar, a committed deceiver of Lance Armstrong-esque proportions, and my god, he wore a Yankee Uniform. Every effort must be made not to just eradicate the man from the Hall of Fame, from the army of human decency, and from the record books, but we must strike this man from memory itself (at least until his triumphant and ticket-generating return). The Anti-A-Rod is Dead! Long Live the Captain!

I guaranfuckintee you, without the very public spiritual and moral defenestration of Alex Rodriguez, the promotion of Derek Jeter to almost literally immortal status would not have happened. Yes, there would have been a lot of nice farewell pieces, most definitely an A-Rod day, and possibly even tributes and gift-presentations at visiting ballparks; in other words, it would have resembled Mariano Rivera’s almost tasteful send-off. But without A-Rod’s bad decisions, absurd lies, and most public execution, the Annus Jeterus Sanctorum would never have happened.

So next time all the Jeter celebrations make you fell all warm an’ fuzzy, thank Alex Rodriguez for making it all happen. 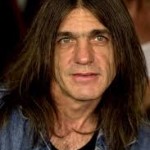 Finally, AC/DC have formally announced that guitarist Malcolm Young has left the band. His nephew Stevie, who had subbed for Malcolm on some tours in the past, will take his place. I have written on an earlier occasion how absolutely vital Malcolm Young was to AC/DC’s sound; along with Johnny Ramone, Bo Diddley, and Steve Jones, he may be the best (and most important) rhythm guitarist of all time, and his sound was AC/DC’s sound, almost more integral to the band’s recorded signature than brother Angus’s needly, spastic, leads and the extraordinary achievements of both vocalists. He was, in essence, the only honestly irreplaceable member of the band (in the sense that Johnny Ramone was, for all of Joey’s girl-group/bubblegum melodic sculpting, the truly irreplaceable member of the Ramones). So many hopes, true and strong, for Malcolm’s health (the official word seems a little vague, but it appears he had a severe stroke), and I respect AC/DC for carrying on, and I hope they honor him the same way they honored Bon.

(“How did they honor Bon?” you ask? Many years ago, I was backstage at an AC/DC concert. I had gone there with Rick Rubin, who was a close friend at the time. This was in 1984, I think, though it could have been in ’85. Benadryl is a cruel mistress, and has made my memories softer than a kitten listening to Tangerine Dream. But anyway. Rick asked Malcolm a question I had long pondered: Why, on the Back in Black album, is there not even one single line, even in tiny print, that says, “Cheers to Bon,” or “We’ll miss you, Laddie,” or something like that. Malcolm looked at us like we were idiots, which of course we were, and said “The ALBUM is CALLED ‘Back in Black,’ for fucks’ sake. The TITLE says that we’re mourning him and we miss him.”)

REMARKABLE INFORMATION! What We Can Learn from Leander “L’il Doodles” Weaver