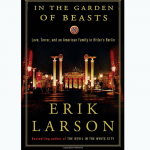 Hitler rose to power in Germany in 1933. In that same year, Franklin D. Roosevelt was inaugurated as President of the United States, and in due course he appointed a new United States Ambassador to Germany. After several false starts—it was clearly going to be a difficult post, given the world financial turmoil and German political upheaval—the position went to William Dodd, a chairman of the Department of History at the University of Chicago and biographer (and friend) of Woodrow Wilson. Using diaries and letters, Erik Larson relates the experiences of Dodd and his family, primarily his daughter, Martha, during Dodd’s 1933-1937 tenure.

Those were tumultuous years indeed in Germany. Once in power, the Nazis reneged on the Versailles Treaty’s onerous war repayment provisions; rebuilt the country’s armed forces; and passed laws limiting and ultimately denying citizenship rights of Jewish citizens. The Night of the Long Knives occurred during the Dodds’ stay in Germany, and that’s essentially where the story ends. Larson makes no bones about what he is doing. In his introduction, he says, “I made no effort in these pages to write another grand history of the age.” Instead, he tells of drives in the country and dinner parties, diplomatic receptions and Nazi Party rallies.

Although both Dodd children (they were already adults in their 20s) moved to Germany with their parents, Larson focuses on William Dodd, the ambassador, and his daughter, Martha. I suspect this is because both of them left substantial amounts of documentary material, unlike the mother and son. (Confusingly, both children were named after their parents. Larson refers to the son, who barely appears in the book, as Billy, and the mother, who is mostly a cipher, though one with an evident backbone, as Mattie.) At first the family was enchanted with the evident prosperity and lovely countryside of Germany. As time passed, evidence of Nazi brutality became impossible to ignore; early in their stay, the two Dodd children witnessed the thuggish humiliation of a German woman engaged to a Jew.

Dodd was one of the few US diplomats to urge that the world engage, rather than ignore or appease, Hitler. Unlike most other members of the diplomatic service at the time, he was not independently wealthy, and he tried to live within his salary as US Ambassador. These acts did nothing to endear him to his superiors at home, or to his staff at the embassy. At the same time, both his children flirted with Soviet communism, and Martha had a long affair with an NKVD operative. Both children’s lives were dominated, in the end, by their actions in Germany during these years. Martha and her husband later fled the US rather than testify before the House Un-American Activities Committee. Billy’s activities had also drawn the attention of HUAC; in the 1940s he was declared “unfit” for employment by the federal government, when he was working for the Federal Communications Committee.

This is a difficult story, which Larson tells well, as far as he goes. Larson spends 90% of the book on the Dodds’ first year in Berlin, finishing up the next three and a half years in a handful of pages. It’s not clear whether he petered out or his sources did. But that first year of Nazi power comes alive in vivid and often grotesque detail. It makes for an entertaining read, but will leave the enquiring reader curious to know more. Do you agree? Let us know in the comments.

Erik LarsonIn the Garden of Beasts