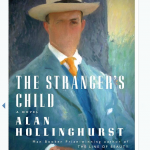 Every once in a while I read a book that is so good I cannot bear to put it down, but at the same time I cannot bear to finish it because then it will be done and I will never be in suspense again. “The Stranger’s Child,” a new book by Alan Hollinghurst, is one of these books.

The book tells the story, in five parts spanning nearly a century, of two families, the Sawles and the Valances, and two houses, the Sawles’ suburban home Two Acres, and the aristocratic Valances’ country pile Corley Court. Cecil Valance visits the Sawles at Two Acres, where two of the family’s three children, Daphne and George, have fallen in love with him. He writes a poem in Daphne’s autograph book; the poem, a paean to rural England, long outlives him, as Cecil is killed in the Great War. Each of the book’s parts centers around a love affair, or several, and the four later parts consider mysteries spawned in the first.

The book is a comedy of manners, with many telling details—a character is put down because he attended a red brick university; a memoir with a hand-written dedication is discovered 30 years later in a second-hand bookstore; a Victorian trophy house becomes a later generation’s hideous pile, broken up into rooms to let, its gardens subdivided for tract houses. Characters peer out from the closet, sometimes but not always retreating into it and firmly slamming the door. A minor event, glancingly mentioned in a letter or memoir, is interpreted as the key to a character by a later generation.

The two houses keep reappearing. So does the shade of Cecil Valance, which wreathes through the lives of all the other characters. Paul Bryant, introduced in the third part, becomes Cecil’s unlikely literary biographer. But in writing about Cecil, Paul upends all the family myths and threatens to unearth family secrets. Paul forgets that his subjects are people, not characters, so he gets everything all wrong–or does he?

“The Stranger’s Child” is exquisite, complex without being cumbersome. The Sawle and Valance families grow together into a large vine, the roots deep and the leaves blurring the outlines of the structure beneath. The younger characters try to untangle the history, while the elders prefer to keep their histories to themselves. Everyone’s efforts give the book its charm, and whether anyone succeeds gives the story its suspense. The book leaves a lot up to the reader, which is part of its appeal. Let us know your interpretation in the comments.

Brooklyn Bugle Book Club: “I Am Forbidden” by Anouk Markovits