Brooklyn Bugle Book Club: “How to Think About Exercise” by Damon Young 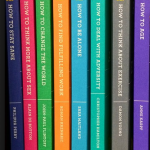 Exercise: you know it’s good for you, often you do it, and usually you acknowledge how good you feel afterwards. It’s mindless, or you take your mind off it by watching TV or listening to “Serial.” But thinking about it? Why read a book about making exercise mindful? Would it surprise you to learn that the answer, at least as far as Damon Young’s well-written and delightful book goes, is that, well, it’s good for you? Or rather, as Young might say, thinking about your exercise is good for the exercise, and that is good for you.

Young begins with brief review of the mind/body problem – you know it from introductory Philosophy – are we minds, or bodies, and if we are both how can something as fantastic as the mind come from something as earthy as the body? Modern neurology research has shown us the biological underpinnings of thought (if you haven’t yet read it, “In Search of Memory” by Eric Kandel is a great introduction) and taking care of the mind entails taking care of the body. But the book is more than that. As Young puts it, it’s not a manual but a companion, “which shows how our minds can thrive as we sweat and strain.”

Young starts out with a chapter on the importance of reverie. Reverie is not just daydreaming. Young takes as his example Charles Darwin, who went out for a walk nearly every day of his life. The walks were exercise, and they were more; in Young’s words they were “a kind of moving meditation.” Exercise, when we are in the midst of a difficult problem, is not just a break, it’s a chance to let the intellect free to roam as well as the body. As Young puts it:

Busy with pounding legs and pumping arms, the intellect’s walls come down, and previously parted ideas and impressions can freely mingle . . . [e]xactly what a trailblazing scientist needed in order to develop a new theory of species marked by constant, purposeless change.

Walking, and running, are easy to do in the city or country. They are relatively slow-paced, and give lots of opportunities for noticing new things while letting the mind wander (especially if you’re not listening to something distracting on your headphones). But humans compete, too – and we do other exercises.

Young follows the initial chapter with chapters on other emotions we have about exercise. There’s one about pride, and the good feeling that can result from competing, against others or against ourselves. Yes, it’s one of the deadly sins, but pride can also be a virtue, or at least an incentive, Young says:

In the pride of sprinting, powerlifting or pedalling, we rightly celebrate ourselves for our committed exertion; for the willingness to move as hard and fast as we possibly can, instead of watching others do so on television. We are, in short, exerting ourselves when we might equally not.

Other chapters, discussing sacrifice (tennis), humility (everything), pain (ditto) and oneness (yoga) follow. Whatever your sport is, the thoughtful reader will find something of interest in this book, one in a series called “The School of Life.” Let us know your favorite in the comments.

Brooklyn Bugle Book Review: “What Belongs To You” A novel by Garth Greenwell