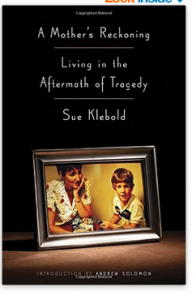 It’s easy to understand why the parent of a murderer may be ostracized by her community. The morning of April 20, 1999 brought horrific news for Sue Klebold, along with many other people that day. As did thirteen other families, she lost a child that day. Unlike all but one of the other families, she lost something else: her younger son, Dylan, was one of the two shooters. (Together, Dylan Klebold and Eric Harris killed 15 people: 12 students, one teacher, and themselves. They caused injuries to 24 more people.) In “A Mother’s Reckoning” Klebold recounts how she moved from shock, to grief, to a guilt she will always feel, and to an acknowledgement that she will also, always, love her son. It’s a gripping piece of work, heartbreaking and frightening because despite the picture the media painted, Dylan showed no signs his parents recognized of his fatal depression and urge to die.

When her husband called to tell her that there had been a shooting at her son’s school Klebold rushed home from work, uncertain of what had happened and worried about her son’s safety. She and her husband were not allowed inside their house. Slowly, it dawned on Klebold that there had been an attack, and that her son was one of the attackers. She wasn’t told he was dead until the end of the day. She does not shy from accepting her son’s blame, but admits that it took her some time. In an early chapter Klebold writes:

Over the course of the afternoon, I had come to understand Dylan was suspected of shooting people, but this fact registered with me only in an abstract way at first. I was convinced Dylan could not have been responsible for taking anyone’s life. I was beginning to accept he had been physically present during the shootings, but Dylan had never hurt anyone or anything in his life, and I knew in my heart he could not have killed anyone. I was wrong, of course . . . In writing this book, I hope to honor the memories of the people my son killed . . . this is the truth: my tears for the victims did eventually come, and they still do. But they did not come that day.

Klebold describes herself and her husband as hands-on parents who kept a close eye on their two boys and “limited the intake of television and sugary cereals.” Dylan was a good kid, who held down a job, did well enough in high school to be admitted to several colleges, and who happily attended his senior prom three days before the shootings. Klebold describes her own slow journey as she came to accept that her son had, along with the murders, committed suicide. Moreover, she says:

Were there signs that I missed that Dylan was going to commit a crime, especially one of such devastating magnitude? No. . . .That doesn’t mean I was powerless, however, because there were signs that year that Dylan was depressed. I now believe that if [Dylan’s father] and I had been equipped then to recognize those signs, and been able to intervene as far as his depression was concerned, we would at least have had fighting chance to prevent what came next.

In the second half of the book, without ever denying Dylan’s culpability or responsibility for the murders he committed before he died, Klebold sets out a nuanced and complex discussion of what’s understood now about suicide and the clues that she now sees – but didn’t when Dylan was alive – that showed her son was depressed. She also describes, briefly, later difficult events: she was diagnosed with breast cancer, her marriage failed, there were lawsuits and death threats. (There are some events, covered by settlements that ended the many lawsuits that followed the Columbine shootings, that Klebold is unable to write about.) The family life Klebold describes is ordinary, and she is careful throughout to acknowledge that there is no hierarchy to suffering. This book is not an attempt to excuse or explain. It’s essentially a work of advocacy, a way of urging more research and suicide prevention outreach and efforts. “A Mother’s Reckoning” is also a description of Klebold’s route back into a community.

“A Mother’s Reckoning” is not an easy book to read – though it is well-written. But it is worth reading, both because Klebold demonstrates that there are no easy ways to explain what happened to her son during what she calls his “brain illness” and because it’s abundantly clear that any number of parents could wind up the parent of a suicide, and some smaller number the parent of a murderer/suicide. As Klebold puts it, loving someone, and telling them so, isn’t good enough to prevent suicide, and many of the parents of suicides she met hadn’t “recognized indicators of potential risk.” Prevention, she tells us, does not require prediction. Instead, she advocates for a tiered risk analysis and response system in schools, along with making access to firearms much harder. It’s a crucial lesson, and the fact that Klebold learned it because of such horrendous circumstances does not render it any the less important.

Note that starting in May and continuing through the summer I’ll be posting every other week.

Brooklyn Bugle Book Review: “The Year of the French,” a novel by Thomas Flanagan