Brooklyn Bugle Book Review: “The Year of the French,” a novel by Thomas Flanagan 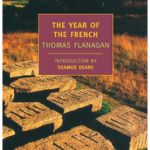 A small country, populated by an uneducated peasantry who make their living as farmers, with a rich oral tradition of stories and poems, whose religious minority governs a religious majority, awakens one day to the presence of troops from another nation that has recently undergone its own revolution. The setting could be any number of countries in the world today, but Thomas Flanagan set his novel “The Year of the French” (available from NYR Books) in the Ireland of 1798. In that year Ireland saw several risings, perhaps inspired by the more successful rebellion of the United States and revolution in France, all of which were defeated by the British, who often used summary proceedings and brutal methods to execute men they regarded as traitors.

To vastly oversimplify a complex and long history, Ireland was governed by Protestants from England, Catholics had very few civil rights, and most of the land was held by landlords, many of whom were absentee and living in England, and worked by tenant farmers, largely Catholic. Much of the land was subject to heavy mortgages, and landowners sometimes found sheep or cows to be more economically appealing than tenant farmers, which led them to drive the farmers and their families off the land, sometimes without any warning. The United Irishmen, the organizing force behind the uprising, attempted to overcome sectarian differences, but the long history of mistrust, as much as the English army’s larger, better-equipped and disciplined army meant the effort was doomed. With these events in the background “The Year of the French” offers a fictional look at their impact in Ireland’s north west counties.

As the novel opens, word of uprisings in Wexford, in the extreme southeast of the country, and unrest in other parts has just reached Mayo, in the far northwest. A group of farmers persuades Owen MacCarthy, a poet and hedge schoolmaster, to write a letter warning the local gentry that removing peasants from the land will be met with resistance. MacCarthy does so, against his better judgment. When three ships arrive in the bay, bringing soldiers and a general from France, a limited but brutal rebellion unfolds. A small contingent of local yeomanry is imprisoned, a few grand homes are pillaged and burned, and several thousand men, armed by the French, leave their harvests and march off to join “The Army of the Gael” they expect is rising in the center of the country.

They do not leave a peaceful county behind. The rebels have managed to persuade the local Sheriff, Dennis Browne, to leave, and establish in his absence a provisional government called the Republic of Connaught. Its president, John Moore, is a member of the Catholic landed gentry, whose father escaped an earlier invasion by decamping to Spain. The elder Moore made a fortune smuggling Spanish brandy into Ireland, and at the end of his life returned with his two sons, George, a historian writing the story of the Girondists, and John. George wants no part of the rebellion; John, who is deeply in love with the daughter of a neighbor, feels he must participate, and he is named President of the Republic of Connaught.

Ably led by the French general, Humbert, the rebels win a skirmish or two, most notably taking the town of Castlebar in southern Mayo, before heading east. More farmers join them, driven perhaps by hope, or maybe attracted to the shift away from their daily labor, or the songs and stories of success that make the rounds of the taverns. As Owen observes at one point, the wheel of fortune “is oiled by whiskey.”

Flanagan tells his story from many points of view, ranging from Owen MacCarthy, the irresolute and regretful poet, to Malcolm Elliott, one of the movers behind the rebellion, who writes as he awaits execution for treason, to Harold Wyndham, a young adjutant to General Cornwallis, reflecting on the events many years later in his own memoirs. Part of Flanagan’s extraordinary achievement in this novel is that he makes the disparate points of view of the main characters sympathetic. (That’s not so of the secondary characters.) John Moore, for example, feels he must follow his heart rather than his head, and act with the rising. His older brother George begs him not to, and then, when John is captured and imprisoned as a traitor, George sets his own scruples and worries aside to bargain with the English in an effort to save John’s life.

The novel includes some wonderful descriptions of the countryside and the wet and changeable weather, as well as vivid depictions of life at the end of the 18th century. One particularly memorable scene describes a landholder, struggling to hold on to his plantation despite mortgages and financial encumbrances, standing on a tower and watching as the Irish army straggles by, under its flag of green silk. As he watches he sees the two sons of one of his tenants run from their field, lean their scythes against the fence, clamber over it, retrieve their scythes and join the scrum. That’s the last he sees of them, though the attentive reader learns their fates.

“The Year of the French” is necessarily lengthy, so that Flanagan can develop the many complexities of his story. The events described in the novel took place at the same time as Napoleon’s incursion into Egypt, events that are never far from the mind of the French general Humbert. The many interlocking storylines and relationships among all the characters, fictive and historical, underline how complex it will be to resolve the history and politics any of the numerous parallel situations while also illustrating just how personal interests can underlie an individual’s political acts.

The Year of the FrenchThomas Flanagan

Brooklyn Bugle Book Club, “The Man Who Changed the Way We Eat: Craig Claiborne and the American Food Renaissance” by Thomas McNamee