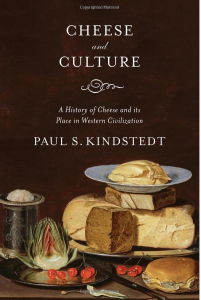 “Cheese and Culture: A History of Cheese and Its Place in Western Civilization by Paul S. Kindstedt, a professor of food science at the University of Vermont, describes the long and fascinating history of animal husbandry and cheese production. Humans have been cultivating field crops since about 9000 or 8500 BC; archeological evidence suggests that sheep and goat herding began very soon thereafter. Cattle domestication took another 1500 years. We learned to breed sheep and goats that could provide more milk than their own newborns needed, and how to extract that milk, around the same time. Once humans started storing it (conveniently, we developed the capacity to make pottery), warm climates meant that milk quickly separated into curds and whey (both are edible). The existence of ancient pottery sieves suggest that humans also wanted to make the separation process more efficient. Sooner or later (Kindstedt suspects the former) we discovered that rennet, acid, and heat aid in the coagulation process. A little aging, and voila: cheese. And then we figured out that salting the outside helps cheese develop a rind.

Update, December 14: Nature is reporting that archeologists have found evidence (Neolithic cheese strainers) of cheese-making in Europe from 7,500 years ago.

Kindstedt traces technological developments from the bronze and iron ages through Biblical, medieval, and early modern times up to the present. The chemistry hasn’t changed. Heating the milk changes the cheese (Kindstedt includes an illustration of bronze age milk boilers). Adding salt to the curds instead of bathing the finished cheese in salt makes for another variation; milling the curds before or after adding salt does so as well. More variation comes from the climate, the local biosphere, the water, and the length and place of the aging.

During the middle ages, monasteries became a repository of cheese-making knowledge; later cheesemaking became the province of dairy maids. The factory production of cheese got started in Europe and the United States in the middle of the 19th century, and local cheese making knowledge was nearly wiped out, especially in the US. Late in the 20th century small farmers and artisanal cheese makers started using the old techniques again. We are still debating issues like cheese labeling (it can’t be called Roquefort if it’s made in Wisconsin) and safety. Kindstedt is particularly clear about the lines in the pitched battle over the use of raw milk in cheese.

It makes for a fascinating story, one that anyone interested in cheese should read. By necessity, some of the story is speculative. For an academic book, it’s quite well written, though there is some repetition. Occasionally, when Kindstedt gets outside his area he oversimplifies (I am thinking in particular of a description of the relationship of the Puritan settlers to the Native Americans). And, while cheese is indisputably a central part of human history sometimes Kindstedt’s focus leads him to descriptions like this one:

It was perhaps three of these elite Zoroastrian magi whom the Gospel According to Luke describes as the wise men from the east, laden with precious gifts of gold, frankincense, and myrrh (and also, perhaps, amply provisioned with cheese?), who followed an unusual star westward from Persia to the Levantine town of Bethlehem to honor a newborn child, one whose influence on western civilization and cheese history would soon be unleashed. . . .

And descriptions like that irresistibly give rise to thoughts of this and this.

What’s your favorite cheese shop, sketch, cheese? Let us know in the comments.

Brooklyn Bugle Book Club: “My Family and Other Hazards” A Memoir by June Melby

Nets Vs. Knicks – Clash of the Boroughs Part Two