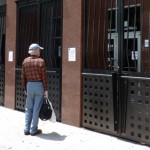 The summer 2012 reading list wasn’t supposed to be quite this steamy. An air conditioning outage at the Brooklyn Heights Library has closed the local branch at 280 Cadman Plaza West for much of the week. The shutdown began at 2 p.m. Tuesday, before the library—which also contains the Business and Careers Library—was officially closed for Independence Day Wednesday and Thursday. Patrons who then discovered that the branch would remain closed until Monday are hot under the collar, according to the Brooklyn Daily Eagle.

A volunteer with Friends of the Brooklyn Heights Library tells BHB, “The AC in the library is broken as it is wont to do every summer. Last Friday it was too hot for the ladies to work even though the library stayed open using fans.”

The cranky AC is hardly an unusual occurrence, according to Eagle reporter Don Evans, who says he’s written about the, uh, condition, many times: “The air conditioning broke down, they had a crew come in to make repairs, then it would happen all over again. On a warm day the staff wouldn’t work, so they closed it. People would go there and discover it was closed, with just a hand-written notice on the door.”

Councilman Steve Levin’s chief of staff Ashley Thompson said his office would be following up to see “how we can fix this. It’s not acceptable if the library closes every single hot day.” 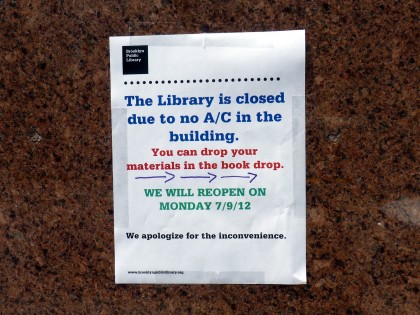