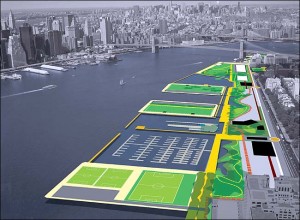 While Brooklyn Bridge Park continues to scrounge together funding to continue buildout of the slow-as-molasses 85-acre waterfront project, Manhattan’s High Line Park has received a $5 million windfall from the city. This, despite the fact that the West Side tourist destination has raked in $85 million in private sector donations, in addition to a lucrative concessions deal and millions of dollars from adjoining building air rights.

DNAInfo.com reports that city park advocates are questioning why High Line was bestowed such a generous gift, which the city targeted to help build the third portion of the park, at a total cost of $90 million. Critics, for one, point to Brooklyn Bridge Park, which the city’s 2013 capital expenditures budget has slated for just $5.5 million, to develop the Pier 4 Beach and Habitat Island and a pedestrian entrance on its north side.

“Unlike the High Line—which pulls in massive cash from fundraising and private donations—Brooklyn Bridge Park relies almost entirely on the city for capital costs,” DNAInfo says. “Its fundraising organization, the Brooklyn Bridge Park Conservancy, puts most of its funds toward programming at the park.” The story points to only two BBP capital projects donations: Jane’s Carousel and the controversial $40 million from New York City Fieldhouse Chairman Joshua Rechnitz to build a rec facility near Pier 5.

BBP’s 85 acres compares to the High Line’s 6.73. New York’s total 2013 appropriation is $105 million for 142 park projects. A spokeswoman for the City Council declined to respond to DNAInfo’s requests for comment.

This Should Be Fun To Watch: Belly Dancing At BBP Friday