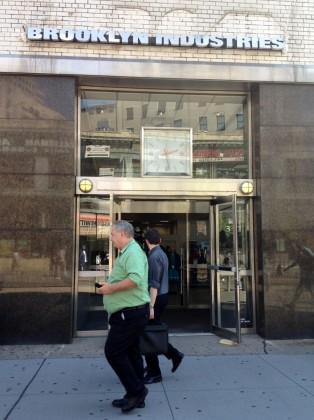 As tipped on BHB July 10, Brooklyn Industries has opened its 16th shop along Fulton Mall in Downtown Brooklyn. The location at 342 Fulton Street, across from Shake Shack—which used to be an HSBC bank—is its ninth Brooklyn store and, according to a manager BHB chatted with Tuesday, is not only its largest destination, but is now the local chain’s flagship.

This Brooklyn Industries hardly resembles the boutique persona of its stores in Cobble Hill, DUMBO and Manhattan, with two spacious floors. And it’s pretty cool that the original bank clock was left in the entrance window. According to its website, the artist-owned men’s and women’s clothier began making bags from recycled vinyl in in 1998 in Williamsburg, and launched its first store on Bedford Avenue in 2001. It calls itself “the paradigm shift in how American companies are run.”

The Fulton Mall shop is obviously another leap forward in the gentrification of Fulton Mall. Add Brooklyn Industries to the new Starbucks and Gap Factory Store, as well as forthcoming Century 21, TJ Maxx, H&M and massive multi-use City Point.