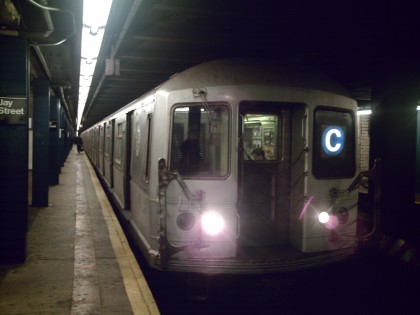 The C Train is the worst subway line in the city according to the latest survey from the Straphangers Campaign. The C rocked the bottom of the group’s list with its kissin’ cousin the A ranking only 3 positions higher. As for the other main lines running through Brooklyn Heights – R, N, 2, 3 – they finished in the middle of the pack. The Q train topped the list as NYC’s best.

One of the main reasons the C finished last according to the report is lack of cleanliness. The rampant filth is a well known issue, especially with readers of the Train Pigs blog which is hyperfocused on exposing folks who eat on the subway. Their latest post says the C is “cursed with some of the oldest cars in the entire fleet possessing their own unique stench.

NYT: Cars on the C line are the oldest in the subway system and among the oldest city subway trains in regular operation anywhere. They are also among the darkest in New York — and that, the transportation authority said, accounted for at least some of the cleanliness complaints.

“I’m sure that there is some cleanliness involved, but a lot of it does have to do with perception,” Charles Seaton, a spokesman for the authority, said. “The fact that the car is a dim car makes it perceived as being dirtier.”

A Tree Falls on Henry Street