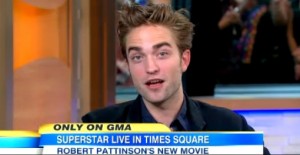 Heartthrob Robert Pattinson’s shambolic interview on Good Morning America today featured a quip about Brooklyn Heights resident Paul Giamatti, who as reported here was on the program earlier this week plugging their movie Cosmopolis.
Watch the interview after the jump.

NY Post: A calmer, cooler Pattinson scored one good zinger in his “GMA” sit down after directors played a clip of his “Cosmopolis” co-star Paul Giamatti comically boasting that he’s the real chick magnet of the flick.
“If you go to Brooklyn Heights, Paul Giamatti is like the biggest,” Pattinson quipped of his indie co-star.

Pattinson is no stranger to Brooklyn Heights – he filmed Remember Me here in 2009.