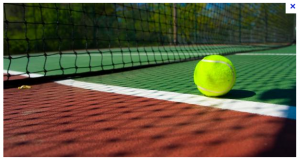 Ask any tennis player to list his or her favorite books about tennis, and almost everyone mentions “Open,” Andre Agassi’s 2009 autobiography. That book is justly celebrated for its honesty about the rigors of professional tennis and its clear voice. Above all, it’s a great story about Agassi’s growth from a punk with attitude and and the appearance of a rebel to one of the game’s great players. He plays well, he plays badly. He learns that his career is at risk because he has failed a drug test. Then, helping a friend’s child through a difficult hospitalization, he writes:

Her suffering, her resilient smile in the face of that suffering, my part in easing her suffering–this, this, is the reason for everything. . . This is why we’re here. To fight through the pain and, when possible, to relieve the pain of others. So simple. So hard to see.

Agassi writes a letter asking for leniency with the drug violation, and vows never to lie, or take drugs, again. He commits to a new diet, a new training regimen, and to practice. He plays challenger events. And, well, you know the rest: winning the French and US Opens in 1999. Marriage to Steffi Graf. Children. The Andre Agassi College Preparatory Academy. The book is a pleasure to read. You can’t beat it as a story of redemption through tennis.

Another of my favorite tennis books is “The Tennis Partner,” by Abraham Verghese. Written in between Verghese’s better known books (“My Own Country,” a memoir, and the recent novel “Cutting for Stone”), in “The Tennis Partner” Verghese tells of his family’s move to El Paso, Texas. His marriage is falling apart, and he has a new job at a teaching hospital. He and an intern, called David Smith, forge a strong friendship on the tennis court. David, a former college tennis player, is also a recovering addict.

David and Verghese play often and, pushing each other, get to know each other’s characters. Verghese paves the way for David to enter his specialty, internal medicine, but David’s recovery has ups and downs. David’s life is mirrored in the regular tennis matches they continue to play, vibrant or mechanical, real or lifeless. Eventually, the disease gets the better of him. Tennis, of course, is a metaphor for life, and Verghese ends the book on his usual graceful note:

[N]othing was as important as the two of us keeping that ball in play. The universe and our very lives depended on this one thing: Get the ball back over the net just one more time.

A local tennis pro told me about “Glory’s Net” by William T. Tilden. “Glory’s Net” tells the story of David Cooper, a talented player who comes from the middle of nowhere (well, Hobansville, Illinois) to win the US Tennis Championship. Cooper plans to return home, open a gas station, and marry his sweetheart, Mary. After he wins he meets Mr. Randolph Harker, a pooh-bah of the US Lawn Tennis Association, who attends the championships with his beautiful daughter, Arline. Harker is shocked, shocked at Cooper’s plans to commercialize his championship (he wants to name the gas station the Champion Inn). Harker and Arline persuade Cooper to become a bond trader at Harker’s firm. David and Mary marry and move to New York. The plan is to allow David the time to practice so as to put further glittering prizes, including the Wimbledon and French titles, within his, and the Harkers’, reach. Arline and David play mixed doubles, and Arline shows David a rather different sort of life off the court.

Tilden was a writer as well as a tennis star, and he brings the European and American circuits of the 1920s to life. The tennis descriptions are clear and exciting. There are appearances by French and American tennis stars at various locations (even the Heights Casino gets a cameo). Tilden also illustrates the hypocrisy of tennis life in the “amateur” period, anticipating the advent of open tennis by nearly 40 years. (You can read Sports Illustrated’s 1968 coverage of the first US Open, which allowed professionals to compete for the US title, here.) The book provides a nice window into 1920s behavior and language. All is nicely resolved, and David and Arline learn that tennis glory can be a trap as well as a prize.

What are your favorite books about tennis? Let us know in the comments.