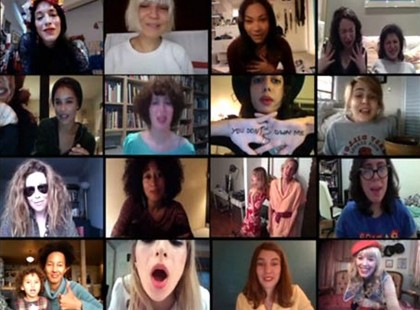 Brooklyn Heights’ rez and HBO’s “Girls” creator Lena Dunham is among more than a dozen celebs who took to their webcams and lip-synced Lesley Gore’s 1964 hit “You Don’t Own Me” in a pointed political anti-Mitt Romney PSA. Spinner.ca notes, “The lip-syncing is interspersed with messages about (Presidential hopeful) Romney and the Republican Party’s plans to defund Planned Parenthood and overturn Roe vs. Wade, among other threats to women’s rights.”

Others participating in the clip that’s housed at Vimeo and has become a webbie sensation include Carrie Brownstein, Miranda July, Karen Elson, Leah Siegel, Alia Shawkat, Zoe Kravitz—and Gore herself, who says in a narrative after the video, “I recorded ‘You Don’t Own Me’ in 1964 and it’s hard for me to believe we’re still fighting for the same things we were then. Yes, ladies, we’ve got to come together, get out there and vote, and protect our bodies. They’re ours. Please vote.”

Check out the full video below the jump.

Tuesday: Brooklyn Heights Promenade Is The Place To Be