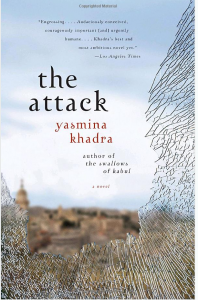 Books about Israeli Arabs don’t come my way very often. “The Attack” tells the story of Dr. Amin Jaafari, an Israeli Arab who has chosen conciliation as his life’s path: the son of a Bedouin tribe, he has worked hard in school, completed his studies as a doctor, and works as a surgeon in a Tel Aviv hospital. He and his wife, Sihem, live in a nice apartment and travel to beautiful spots in Europe and Asia as tourists. When he learns, after a long night of operating on the victims, that his beloved wife is the suicide bomber who has caused a devastating explosion, he is shocked beyond comprehension.

But his wife is dead, apparently by her own hand, and so are a score of others. Jaafari sets off on a voyage, trying to discover what might have caused her to upset their–or is it only his–perfectly ordered world? Aided by his closest friends, all of them Israeli Jews, he travels to the Biblical cities of Bethlehem and Nazareth, seeking out members of his extended family, in a search for clues. And then he goes farther, crossing behind the Wall to Palestine, attempting to penetrate the network that planned this brutal bombing.

To his dismay, Jaafari finds that neither side is happy with him. Despite his success as a doctor, various Arabs feel that he has made so many compromises with the hated Israelis that he can no longer even understand what might have motivated Sihem. To the Israelis, beyond those who know and love him, not even his work as a doctor is enough to overcome the mistrust they feel for an Arab, any Arab. As a microcosm encapsulating the tensions inherent living side by side in a tiny country, it’s a compelling narrative, a fitting partner to the scenes in David Grossman’s “To the End of the Land” where Ora learns from her regular driver about the underground medical network treating very poor Israeli Arabs. (You can see my review of that book here.)

“The Attack” provides vivid pictures of life in the Occupied Territories, as well as the stresses Arab Israelis undergo. Sihem remains offstage; Khadra triangulates her action with Jaafari’s values and the activists’ need for secrecy, forcing us to come to our own conclusions about her motivation. On his trip, Jaafari suffers attacks, both physical and intellectual, and comes to question his choices. Has his life been a waste? Has the search? Let us know what you think in the comments.