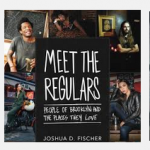 The urban sociologist Ray Oldenburg has written about the Third Place – gathering spots like bars, coffee shops, and general stores, and how important they are to making communities vibrant. Without them, people are either at work or tucked up in private at home – and have no place to meet, talk, relax, drink, write, reflect and allow grassroots politics to develop. In his book “Meet the Regulars” Joshua D. Fischer, a writer for the blog Bedford + Bowery, has culled and collected his posts. Fischer profiles a range of people – some famous, some not – in their favorite places, mostly bars, but also yoga studios, Melody Lanes, Brooklyn Strategist and Brooklyn Bridge Park. The selection of places is heavily weighted towards Williamsburg and Greenpoint, and the age of the regulars tends toward people in their twenties, with the occasional appearance of a somewhat older person.

All the same, there’s a lot of diversity here: Ellen Stagg, a straight photographer who hangs out at the strip club Pumps because “the girls in the neighborhood probably feel cool and safe to dance here;” Joey Green, a gay African-American whose stepfather was white, who likes Metropolitan because it’s completely non-judgmental; Ariel Pellman, who likes the Steampunk bar Way Station, who’s photographed in a corset. Fischer quotes her:

I do waist training, which means I wear [a corset] on a regular basis and can cinch my waist to a very small size. I am wearing a bustle. So the whole thing is very reminiscent of steampunk themes. This being a steampunk bar, I wanted to wear something fun.

If Fischer asked her why she thinks it’s fun to wear articles of clothing that exaggerate old-fashioned (not to say ancient) ideas of the ideal female form, he doesn’t report it. But the theme of exploration of different selves and different lives emerges in this and other interviews. Life as a young adult – whether in a new place or not – is hard, and the stories people tell in their interviews often circle around their discoveries of themselves as they figure out who they are. It’s not just navel-gazing: these New Yorkers will shape the city’s future.

The second theme that emerges, as might be expected in such a book based in Brooklyn, is gentrification: the artistic (and yes, even the artisanal) ferment that started here and has drawn many people has been wonderful, but it’s carried a cost. To his credit, Fischer both allows the theme to emerge from the interviews he’s elected to include, and addresses it head on, in one of the topical essays (“Are these the best places in Brooklyn?”, “I hate the future”) that break up the stream of interviews.

Rents in Williamsburg and Greenpoint have shot up in the last 15 years, and Williamsburg is now home to an Apple store and a Whole Foods, not to mention a series of tall waterside apartment buildings. There’s little space to operate in what Fischer calls “the spirit of what made Williamsburg ‘cool’”; those joints are now opening further east, in Bushwick and Brownsville. That means that residents in those neighborhoods have also been displaced – yet at the same time, as Fischer points out, you can’t blame store and homeowners who are offered millions for their properties.

It’s a complicated cycle, and Fischer’s subjects are as caught up in it as the people who preceded and will follow them. Fischer quotes Eddie Cedeno, half-Cuban, half-Ecuadorean, who owns a coffee shop in Bushwick. Cedeno acknowledges that his neighbors are skeptical, but he wants new businesses to open up even though his neighbors – the ones he’s squeezing out – remind him of his parents. Fischer asks whether gentrification is OK when it’s an independent business, not a chain; when it’s necessity, not luxury – though of course one person’s daily cup of coffee is another’s luxury. He hopes that development will be followed by services. The reader hopes that as they settle into adult life, his subjects will use the networks they’ve developed in their third places to organize, vote, and even run for office, to be sure the people are heard.

If you want to read an earlier view of gentrification in Brooklyn, read “A Meaningful Life” by L.J. Davis (reviewed here). Let us know your thoughts about how things have changed, or even your favorite Brooklyn hangout, in the comments.