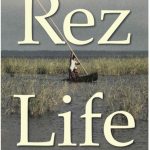 David Treuer begins his engrossing memoir “Rez Life” by describing his grandfather’s suicide and the way the family comes together to mourn, to cope, and to clean up. He, along with his uncles, his brothers, and his cousins dig the grave and clean up the old man’s house. It’s a fitting beginning for this complex look at reservation life. Each chapter starts out with a real person, then takes off from that person’s story to examine another facet of reservation life, and the complex series of negotiations, treaties, policies and laws that created each particular result.

One chapter starts with a conservation officer and a conflict over hunting and fishing rights – can the tribe fine a non-tribal, non-resident for fishing in its (lake) waters? And why do Indians have all these special privileges anyway? It’s a jumping off point for a careful discussion of treaties and the origins of the reservations. Another chapter begins with a vignette of a tribal judge, who also happens to be the author’s mother, sitting in tribal court, meting out punishment for the assorted Indian vandals, juvenile delinquents, and drug abusers appearing before her. This chapter discusses families, tribal law enforcement, gathering of wild rice, and state and federal jurisdiction – and the treaties and policies that got the tribe to this day.

Yet another chapter starts with a discussion of a small tax bill, an Indian couple, and the lawsuit that resulted in a Supreme Court decision that laid the basis for casino gambling. Along the way, that chapter touches on sovereignty, assimilation policies, the Trail of Tears. The final chapter discusses, painfully, the Jones twins, who were separated from their parents at the age of five and sent to an Indian boarding school where they were forced to speak English and learn non-traditional ways of life. It’s a starting point for an examination of the role of language in retaining identity and preserving culture. It also allows Treuer to paint a hopeful picture of some immersion Ojibwe language schools that will ensure the language continues, though of course many other Native American languages have disappeared.

Along the way, Treuer takes on the American Indian Movement of the 1970s, as well as other stereotypes – the drunken Indian living impoverished on the rez, the Native American who touched the earth only lightly. The result is a carefully orchestrated trip through a vortex. The effect is a spiral, with different topics touched on repeatedly, each new context adding to the depth and precision of the discussion. What could be a recipe for a disorganized mess is instead a tour de force of argument, layered and meaningful.

Do you have a similar response to this approach to the story? A different one? Let us know in the comments.