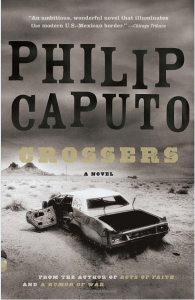 After his wife is killed in one of the planes on 9/11, Gil Castle finds himself adrift, unmoored by grief and bewildered at the post-attack atmosphere. His grown daughters try to coax him into therapy that he finds vacuous and unhelpful. Instead of staying in Connecticut, he abruptly retires, winds up his affairs on the East Coast, and accepts an invitation to stay with his cousin, Blaine Erskine and Blaine’s wife Monica on their ranch in Arizona, near the Mexican border. It’s so near the border, in fact, that drug runners and undocumented immigrants regularly pass through.

Gil responds to the outdoor life in ways he hadn’t expected. He enjoys the company of his relatives, but mostly spends time with alone with his dog, hunting or just walking the scenic ranch lands. It feels just foreign enough to take Gil out of himself. Except that, in a way, Gil has come home. Gil’s grandfather and his brother started the ranch a century earlier. Gil’s and Blaine’s grandfather, Ben Erskine, was a Westerner who lived on both sides of the law.

Two events bring Gil back into a life that looks beyond the day to day of his own grief. One day, out with his cousin, they find a near-dead drug runner. Gil and Blaine rescue him, and he leads them to his two murdered friends. The problems of the world are not so far away after all. On another hunting trip Gil meets a beautiful neighbor, Tessa. She is also a rancher, and Gil and Blaine occasionally help her out. And as a result Gil is reminded of the world’s joys as well.

Murdered immigrants, drug runners, land grabs, and law enforcement officers of dubious morals lurk on both sides of the border. The border is often an abstraction to those crossing it and even to those charged with enforcing the boundary it ostensibly marks. As the modern story develops Caputo also draws on Erskine family history and lore. Grandfather and grandsons react in similar ways to similar stresses in different times. Those reactions contribute to the eventual outcome in ways that George Santayana would have recognized.

True to Caputo’s form, there are also vivid descriptions of place, carefully drawn characters and storytelling that will keep you up late to find out what happened. Over the course of the book Caputo considers Mexicans’ hunger for work, Americans’ hunger for drugs, and the greed of those who help move people and drugs from one country to another. Along the way he also considers notions of home, and what makes one bit of ground Mexico and another next to it the United States. Caputo needs a lot of characters to tell this complicated story, and some of the Mexicans in particular are more sketched in than fully developed. But in the end it doesn’t matter, as the many threads come together in an explosive but satisfying finish.