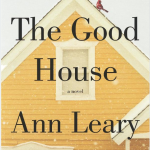 People are complex – we are not so much good or bad, as capable of doing both good things as we are of bad acts. While we may rationalize our lesser actions, it’s the consequences and how we deal with them that really count. Or at least that’s a central theme in the story that Ann Leary tells in her new novel “The Good House.”

Hildy Good is a real estate broker living on Boston’s North Shore. She’s divorced, with two grown children and an apple-of-her-eye young grandson. She’s lived in Wendover, Massachusetts, located somewhere in the mythical territory between Salem and Beverly, for her entire life. She is descended from one of the Salem witches, and one of her party tricks is pretending to have second sight. She’s a tough broad living alone with her two dogs, and she knows that in an earlier era she might indeed have been burned at the stake.

One of the houses Hildy sold was bought by Rebecca McAllister and her husband. The McAllisters moved with their two young adopted sons to, they hope, escape the depression that is crushing Rebecca. Rebecca has room to keep horses on her property, and the area is home a hunt club that figures in the novel. Instead, she becomes involved with a local psychiatrist, Peter Newbold, whose wife prefers their full-time home in Cambridge to their weekend place in Wendover.

Hildy is friendly with Peter, as his family has long connections to the town, and Hildy and Rebecca become friends – a friendship that is not quite healthy for either character. Making the central character a real estate broker gives Leary the opportunity to introduce a series of characters, some of them local and quirky (they are often the tradesmen and handymen), others who have come to town more recently. The interactions among the two sets of townspeople give the novel its action and allow Leary to explore her themes, among them the importance of place and home in our lives.

But this is not a novel of class conflict or gentrification so much as it is about alcoholism. Because, though she doesn’t admit it, Hildy is an alcoholic, and her gradual descent into chaos is told subtly and with great suppleness. It’s the best part of the book, as Leary slowly allows the reader to become aware of Hildy’s dawning consciousness that she has a problem, and that she may have done some bad, if not unforgivable, acts.

The resolution, in terms of outcomes for the characters, is not always pretty, but it is compelling, despite the way Leary leans on the shift in the Rebecca-Peter relationship to bring the ending about. The book contains one of the best illustrations of the mind of an addict I have found. Do you agree? Let us know in the comments.

Update: You can listen to an excerpt from the audiobook here.