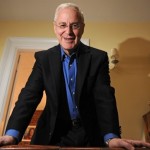 Brooklyn Heights resident Ron Chernow, who won a 2011 Pulitzer Prize for his biography Washington: A Life, as well as a place in the Brooklyn Heights Blog’s Top 10 that year, has received the BIO award from the non-profit Biographers International Organization.

During a gathering May 18 at the Roosevelt Hotel in midtown Manhattan, Chernow, 64, spoke about some of his most famous subjects and how their public reputations often concealed a far more interesting private person: “Once upon a time, biography was a very formal, straight-laced affair. But nowadays we all expect the enterprising biographer to ferret out that hidden self.”

The BIO award is given for making a “major contribution” to the field of biography. Previous winners include Robert Caro and Arnold Rampersad.