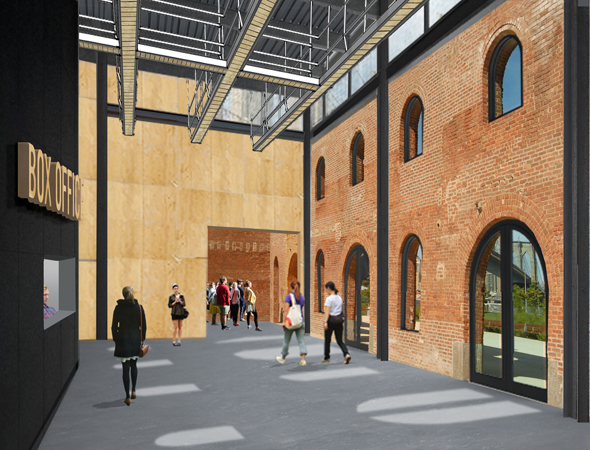 You may recall the lengthy legal battle over the St. Ann’s Warehouse theater’s attempt to build a new performance space inside the 19th century Tobacco Warehouse in the Fulton Ferry Historic District, which led to a court decision holding that the transfer of the Tobacco Warehouse space from Brooklyn Bridge Park had not been done according to law. This legal obstacle has now been overcome by a transfer of new land into the Park in exchange for the Tobacco Warehouse, and St. Ann’s has presented new plans (see image) for a performance space, community room, and lobby to be built inside the roofless shell of the Warehouse. You can read more about the planned new facility and see more images in Theatermania.

The design proposal by St. Ann’s was considered by the Executive Committee of Community Board 2 at its meeting this last week and will go to the full board on May 8.

Note: This post has been modified since original publication.